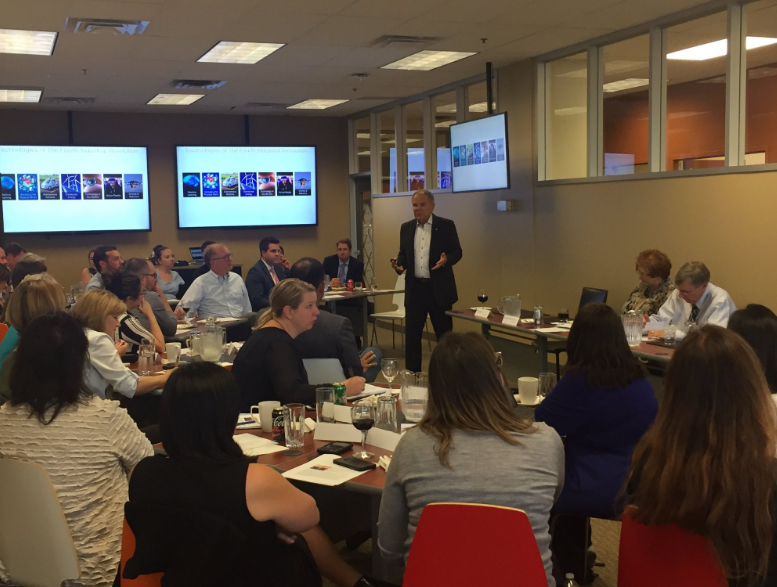 If the dialogue at Elevate Toronto is any indication, the future of businesses and technology in Toronto is diverse, driven by strong community-based collaborations — and very, very promising.

Between September 12 to 14, the first edition of the tech-centred festival showcases Toronto as a world-class destination for innovation. The Blockchain and FinTech track was at full capacity Wednesday morning, as startups, investors, and corporate innovators came together to celebrate the flourishing tech ecosystem in the GTA. Throughout the festival, several experts gave a closer look into Toronto’s trailblazing work in artificial intelligence, FinTech, blockchain, and emerging technology.

“Imagine if we could connect ourselves in this city, in this country, in this planet with some kind of vast new network and ledger made of glass and air and electrons. Where we could transact, do business, create value and build prosperity in a more distributed way,” said Don Tapscott, a leading authority on technology and its impacts on society. He’s a co-founder of the new Blockchain Research Institute, and an author of 16 books.

“We need to get our identities back so we can manage them responsibly.”

Tapscott proposes that we create a globally distributed ledger that stores, manages, and transacts everything of value in a secure and private way. “What if there was a native digital medium for value, just like we have for information? Well, now we have the answer: blockchains,” he said.

How to get started, and what challenges lie ahead

Peter Tilton, SVP of digital at RBC, says events Elevate Toronto are a first step to exploring the evolving landscape of FinTech.

“From a technology point of view, banks are trying to do 100 to 200 things, and usually they’re not doing these things well. FinTech generally does one thing and it does it well,” he said. “The challenge is that there are a paralyzing number of choices. It’s all about choosing the right one, it’s all about exploring your options.”

For Tapscott, Canada is the emerging leader in this new age of technological transformation, not Silicon Valley.

“The internet is entering a second era; this will bring about the biggest changes in financial services since the creation of chartered banks,” he said. “If we do this right, we can position Canada as the global leader, not just in financial services, but in building an innovation economy of the 21st century.”

Tapscott went on to point out other assets that Canada has, like the biggest incubators and a government that is stable and committed to innovation.

Identities in the digital age

Experts highlighted the fact that we are all leaving a trail of digital crumbs as we go through life. Our identities consist of data, and we can no longer use this data to manage or monetize our lives.

“We need to get our identities back so that we can manage them responsibly and benefit from them,” Tapscott said. “There are projects underway right now to create a virtual identity on blockchain. It’s in a black box and you own it. It will sweep up all this data and create a rich identity.”

He went on to compare hacking a blockchain to turning a nugget back into a chicken; it’s not impossible, but it seems highly unlikely.

Tapscott and his son, Alex, have also started studying nature in an attempt to better understand distributed trust in businesses. They have studied the behaviour of starlings in the Moors of England. “When they are in a group, they come together in murmurations. The collective power of these birds protects them from the hawk,” he said. “When the moment is right, magic happens. There’s leadership, but there is no one leader.”

What collaboration in #FinTech looks like via panelists from @Borrowell @Wealthsimple @RBC @ratehub #elevatetoronto pic.twitter.com/FfVufQnGhS

Tapscott sees this as a metaphor for the functions of blockchain. Like the birds, blockchain is highly distributed, there’s massive collaboration, there are rules, and the most important thing is that there is a great dependence. “This murmuration functions as if the interests of the individual bird were connected to the interest of the murmuration, and as such it has a great integrity,” he said.

Tapscott has worked to create an institute that investigates the strategic issues on blockchain with 70 projects underway. He’s also currently working on the first public traded carbon credit called CarbonX, which encourages individuals and families to benefit from going green, not just companies.

“We have a new paradigm, and when you get one of these you have a crisis of leadership,” he said. “These things cause dislocation and vested interests fight against change. The important thing to consider is: how will your organization find leadership to bring about change?”

The hundreds of innovators that gathered at OneEleven have one common goal: to explore the promise of the digital age, and perhaps to even make the world a better place as a result. “I’m of the view that the future is not something to be predicted, it’s something to be achieved,” Tapscott said. “The revolution is sitting in this room; join the revolution.”

Last night’s edition of BNN’s The Disruptors featured the CEO of a startup that knows one person’s trash is another person’s treasure. Disruptors co-host…