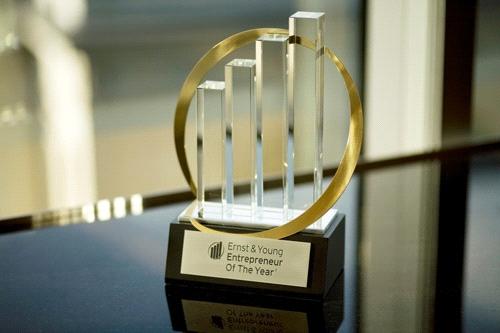 Ernst & Young has selected its “Entrepreneur of the Year” for the Prairies region, in Dale Wishewan of Booster Juice.

EY celebrated 20 years of honouring entrepreneurs by presenting the founder of the international quick-service smoothie chain with the award. Wishewan and his cofounder started Booster Juice in 1999 in the Edmonton suburb of Sherwood Park, growing the business to 50 locations in just two years — a Canadian franchising record. Today the company boasts 300 stores worldwide.

“Dale set out to create an international brand when the concept of on-the-go smoothies was in its infancy,” said EY’s Rob Jolley. “That’s exactly the kind of fearless forward thinking we need to inspire the next generation of entrepreneurs — no idea is too big, or too great to achieve.”

According to EY’s G20 Entrepreneurship Barometer 2013, while Canada scores highly on its entrepreneurship culture, relatively low levels of self-employment suggest there’s room for larger numbers of people to start businesses.

“Fostering a robust entrepreneurial culture starts by building a strong pipeline of entrepreneurial talent. Government, academia and business must work together to encourage the next generation to pursue their ambitions,” said Jolley. “We’re proud to include Dale on our program’s long list of inspiring entrepreneurs — and to share stories like his that can set the wheels in motion for future business leaders.”

Entrepreneur Of The Year celebrates the contribution and spirit of entrepreneurs everywhere. The Canadian program is in its 20th year of honouring the country’s most impressive entrepreneurs from all areas of business. Award finalists are chosen based on their vision, leadership, financial success and social responsibility.

The gala also celebrated seven past Prairies winners who went on to win the title of Canada’s Entrepreneur Of The Year with Prairies Legends awards.

The overall winners from each region, including Wishewan, will gather in Toronto on November 27 for the national gala. Quebec’s gala will be held on October 30, on the same night as Montreal’s Startup Open House. The wednesday night should be a fun one for Montreal entrepreneurs and startup enthusiasts.

Laurel Douglas, the CEO of British Columbia-based Women’s Enterprise Centre (WEC) is stepping down from the role after more than 15 years with the…