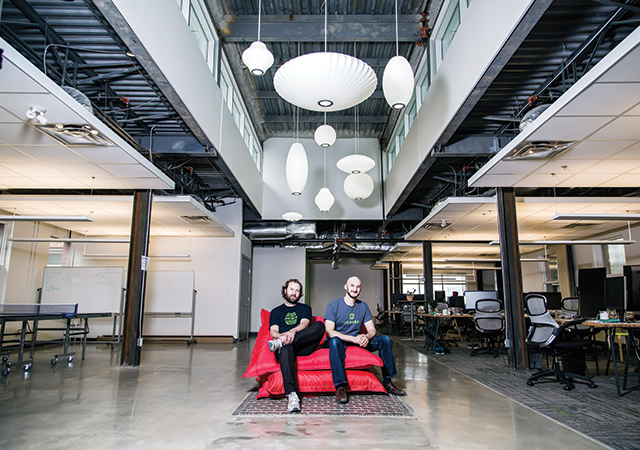 A year and a half after it announced an $8 million Series A, Jobber has opened a Toronto sales office as it focuses on growth.

“We have the majority of that money still in the bank thanks to our diligence around how we deploy capital and focusing on profitable growth,” says Jobber CEO Sam Pillar, who adds that the company is profitable.

The Edmonton-based company’s Toronto office will be located at OneEleven, which just hosted the opening of its 250,000 square foot space last week. Jobber has also brought on new VP of marketing David McInInch, who will be responsible for overseeing the company’s growth and go-to-market strategy and leading the new Toronto office. McIninch has 15 years of experience in the marketing industry at companies like ADP, Acquisio, and Morneau Shepell.

“It’s the biggest labour market in Canada, and the time zone is great for us from a sales and customer support perspective,” said Pillar. “Toronto has a lot of really great talent to complement what we have in Edmonton, and honestly, there are certain kinds of roles, that Edmonton is sort of lacking…that pedigree that we can’t get access to in Edmonton. So there are some of those kinds of roles that Toronto will be beneficial for.”

“Hopefully we can be the next Shopify of Edmonton, and do for Edmonton what Shopify has done for Ottawa.”

Jobber’s platform is targeted to field service companies like the landscaping and cleaning industries, and offers scheduling, invoicing, and customer management services. The 80-person company has users in 30 countries, which deliver more than $136 million in services each month. “We’ve been very efficient in how we’ve grown. It was just a comfortable understanding of our unit economics and our growth dynamics and the levers that we know we need to pull harder.”

While the company is expanding, Pillar says the team is committed to its headquarters in Edmonton; in fact, he wants to set an example for other burgeoning tech companies in the city.

“I can’t be the only person who doesn’t believe that the sort of wild west sort of oil craze is going to continue forever, and we’ve already seen it start to crumble a little bit and I think that’s really just the beginning,” Pillar says. “It’s really important that from a provincial perspective that we have other ways to ensure people in the province can continue to live and work here. And I think tech is a really awesome way to do that.”

At the same time, Pillar says that the tech scene in Edmonton has changed a lot since the company launched in 2011, with the rise of more resources like Startup Edmonton, coworking spaces, and capital coming to the area. And the company has grown with it — the company recently announced Jobber Payments, its own white-label payments solution meant to help businesses get paid faster, rather than having to wait a month for a cheque.

“Hopefully we can be the next Shopify of Edmonton, and do for Edmonton what Shopify has done for Ottawa,” Pillar said. “Thinking about Alberta sort of 20, 30, 50 years out. We’re going to be in big, big trouble if we don’t figure something out, and I think tech is a really great way to solve the problem, and now is the time to start.”

Toronto-based TransPod has released the findings of its Initial Order of Magnitute Analysis, which identifies preliminary costs for building TransPod’s ultra-high-speed hyperloop line between…