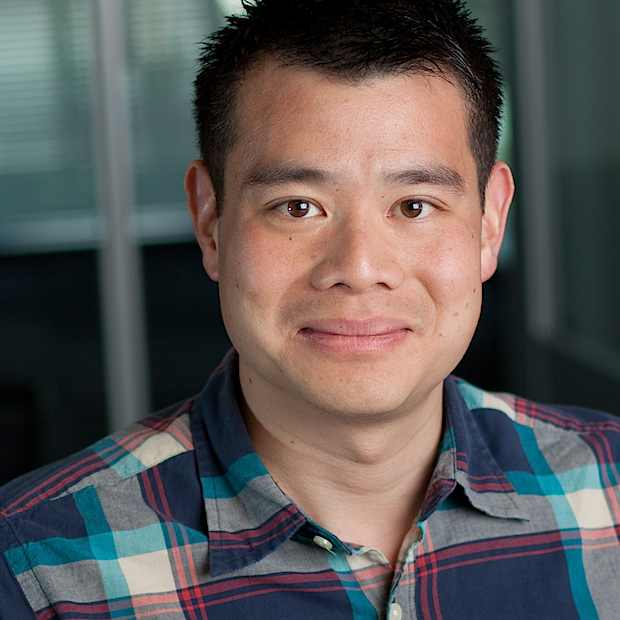 We don’t often have one of Silicon Valley’s most influential builders speak at local Montreal tech events, so it was a treat when AccelerateMTL had Wesley Chan as its prime speaker.

After the event I sat down at Bar Prime Time in Montreal’s plateau neighbourhood with the former early employee at Google. Joining us was notoriously well-dressed cofounder of Toronto’s Project: SPACES, Jeffrey Howard. We all drank a few beers and I tried to ask Chan everything I could think of, which never ends up being the best questions one could have asked.

I’d guess that many in the AccelerateMTL crowd had never had a chance to hear from someone who both worked under Bill Gates, alongside Sergey Brin and Larry Page, and was mentored by Intuit chairman Bill Campbell. Wes Chan said he started at Google 12 years ago, when “dogs were still running around the office and nobody knew who we were”.

He’s the man who can be credited with the creation of Google Analytics, after purchasing Urchin Software Corporation. He also lead the team that built Google Voice, first purchasing the company that would become Voice, Grand Central. He opened Google’s China offices and eventually, after trying to quite a few times, would join Google Ventures as an investment partner.

Last week Chan quit the Google umbrella after more than a decade, and yesterday he found himself in Montreal for the first time. While his speech was speckled with typical startup jargon and ideology common in the space, he still offered insightful advice (and lots of cool stories we all like to hear).

Chan’s message largely seemed to revolved around two pillars: one being that an entrepreneur needs a lot of luck to make to the big leagues (yeah, sucks, I know), and two, entrepreneurs need to be selfless people.

Within the luck pillar, Chan said people like Page and Brin are “smart, they’re good, and they’re lucky.” It was “an amazing, serendipitous set of circumstances” that lead to the technology company’s meteoric rise, coupled with strong company values and hiring the right people.

Chan went to MIT and got his first break as an intern at Microsoft’s Seattle offices. There he said Bill Gates would hold “Bill G Reviews”. “He would say all the great things about what he liked that you did and he would tell you all the horrible things you didn’t do well, and he’d give you advice on how to improve things, which is something that people don’t do anymore,” said Chan. “But the fact that he was involved in everything back then showed you how much he cared about everything, and how involved he was.”

Later on at Google, he said Page and Brin would do something called “snippits”, where workers would write the three things that they accomplished the week before and the three things that they would do that week, and everyone in the company would read it. “It allowed us to prioritize things that were important. It’s very easy to feel like you have this overwhelming amount of tasks that you have to do, and watching Larry and Sergey spend the time and making sure the rest of the company understand, that was equally important.”

Along those same lines Chan said everyone at Google would celebrate failure. Every time Chan screwed up on something, Page would say “that’s great, write a post-mortem, we’re going to read this together as a group and we’re going to learn from it.” It was something employees were celebrated for, and “I was teaching myself ,” said Chan.

Going back to luck, he admitted several of those failures could have cost the company. “There were so many decisions that we made that could have totally f***ed the company up,” said Chan. “In spite of that, you have Google, Microsoft and Facebook and in hindsight, it could have gone either way.”

Being a selfless employee and keeping the greater, collective goal in mind was another theme of Chan’s talk. Much of that thinking came from the well-publicized business leader Bill Campbell, a mentor of Chan’s. Campbell coached the Columbia University Lions football team from 1974-1979, long before he would go on to leading roles at Kodak, Apple, Go Corporation and Intuit. He’s worth over $200 million.

To Chan, it’s ironic that one of the losingest coaches in NCAA football history became “the winningest coach in executive management in tech.”

“I learned that nothing happens because of you, things only happen because you cared for it to happen. You foster an environment and you bring people together who want to accomplish that goal, you never accomplish anything because of you.”

The stories were all well and good, but I wanted to know what a guy like Chan wants to do now. He’s jobless, presumably worth a lot of money, and has built things that millions of people use everyday. A lot of the boxes have been checked.

He talked about moving on from building one’s resume, such as he’s done quite successfully, to “building your eulogy traits.” Now he’s focused on building up those positive things that people would say at his funeral.

“What I’m doing next is probably more on my eulogy side. It’s not charity, it’s not non-profit, it’s not policy or running for office, it’s focusing on building something that I think matters and my next step is searching that out and making that happen.”

It’s not entirely clear what that may be, but it looks like he’ll be building something again. Which led me to my next question: must you necessarily build something in tech again? Why not just chill out?To that he said he doesn’t know the meaning of retirement, which was where the startup speak started creeping in his lingo again. He wants to “work for a purpose.”

“Sometimes when people pitch me, I have fun with terms like YAMP- “Yet Another Music Project,” and I’m sitting there thinking, why is this a purpose that you want to spend your life building?” said Chan. “It’s rare that you find someone that finds that vision and that purpose. And when you’re lucky enough to have the opportunity to find that purpose you take it.”

Looks like he found it once with Google- we think he’ll find it again.

Shopify has released its financial results for the first quarter of 2017. The company reported significant business milestones for the year, as well as…