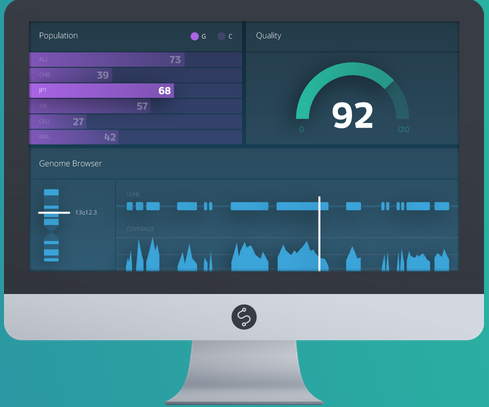 SolveBio was cofounded by CEO Mark Kaganovich as well as two Montrealers who formerly worked as early employees at 5by (which later sold to San Francisco’s StumbleUpon). Their names are David Caplan and David Gross, while a fourth cofounder is Paul George.

Kaplan and Gross have frequently collaborated on projects over the past ten years, although this appears to be a permanent fix for Caplan.

SolveBio helps format DNA data sets into a single, clean and recognizable formats so that hospitals, private institutions or other clinics can compare an individual’s DNA sequence. Today most places can complete a DNA sequencing for a person for under $1,000. Unfortunately, messy, unstructured reference data makes it difficult for doctors and researchers to use.

Comparing a patient’s DNA to others with similar DNA can help doctors find solutions and diagnoses much easier. SolveBio is currently creating a platform that can take messy, scattered genomics data and stick it into research applications, which can then be made available as an API.

Caplan spoke with us earlier today and explained that the field of genomics and DNA sequencing is being used in hospitals and clinics far more frequently than five years ago, when it was rather expensive. “It’s really important that they have really easy, clean access to this reference data,” he told BetaKit. “It’s really crucial to help them understand someone’s gene sequence. In a sense the knowledge of biology that we know throughout the whole world is recorded in these data sets, and it’s scattered all over the place, it messy, its in different formats.”

SolveBio does the hard work, cleans up the data and helps hospitals integrate the data into their applications.

“The more reference data, the more accurate the test,” the CEO Kaganovich told Techcrunch. “Right now there is a very limited amount of useful data out there. Whatever open data is out there, it is in inconsistent formats and quality, and not programmatically accessible. It takes a team of internal programmers to build the infrastructure to collect the data, parse it, normalize it, connect it, and serve it up to clinicians.”

Caplan, a graduate of both the University of Calgary and the University of Toronto, comes into the startup with a computer science and biology background, ideal for bioinformatics. He previously worked with Kaganovich on another startup in between his undergraduate and graduate degrees. That company was building a a scientific reference manager for literature, called “LabMeeting”.

Gross, meanwhile, is the other Montrealer. He’s a designer and has frequently collaborated with Caplan throughout their startup careers.

The pair both helped launch 5by, which was founded by Montrealer Greg Isenberg and later acquired by StumbleUpon in September.

Minister of Innovation, Science, and Economic Development Navdeep Bains announced the last shortlisted supercluster yesterday in Vancouver, where he said BC’s focus would be…