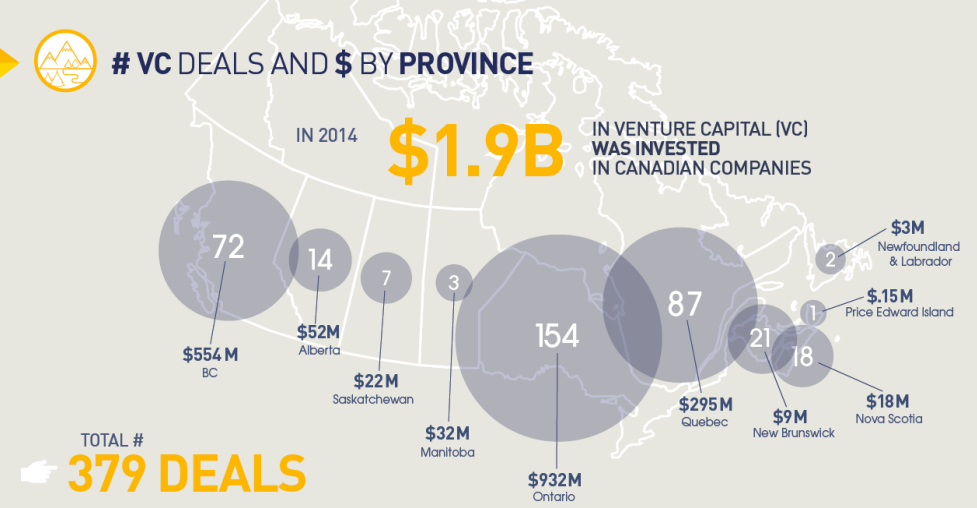 The Canadian Venture Capital & Private Equity Association (CVCA) has released its 2014 report on investment in Canada. The report states that there was a total of 379 venture capital deals in Canada in 2014, with the amount of disclosed VC investments totalling $1.9 billion. Comparatively, the CVCA reported 296 private equity deals in Canada with $41.2 billion invested.

ICT (Information and Communications Technology) by far was the largest Canadian venture capital sector, accounting for 63% ($1.3 billion) of all completed deals, with life sciences ($423 million) and clean technology ($133 million) accounting for the rest. Ontario accounted for almost half of the deals at 154, with Quebec (87 deals) and British Columbia (72) splitting the rest.

In terms of VC funds, the CVCA reported that 33 different funds raised a total of $1.2 billion in 2014, with the median fund amount raised being $17 million. Check the gallery below for the breakdown of investments by fund.

To put these results in perspective, according to PWC, the amount of disclosed VC investments in the U.S. for Q3 2014 alone was $9.9 billion, with $33 billion invested through three quarters of 2014. Or as BetaKit reader (and co-Founder of Janbr) Brandon Wang put it, “It blows my mind that Uber has raised more than 2x the funding of all of Canada in a year.”

Those interested in reading the full CVCA venture capital market activity report can do so here.