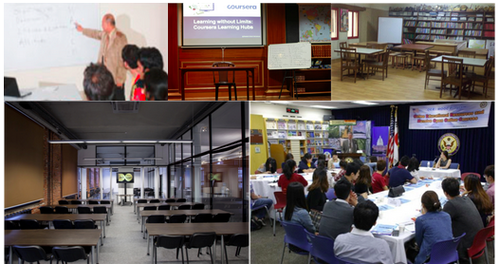 Coursera launched the Learning Hubs program last year to give communities around the world the ability to access online courses for free, and also to engage with others in a “blended learning setting.”

“We’ve since partnered with a total of 17 trusted institutions around the world including the US Department of State to establish physical spaces where students can access the necessary technology and a global community of learners,” wrote the company in a blog post.

For each city, a sponsoring organization or company was named as “Learning Hub Partners”. For Toronto it was the coding education school BrainStation, which was recently named in BetaKit. There we profiled the growing “battle” in Toronto for coding school supremacy, with at least four schools making waves.

In its new initiative, Coursera partnered with some well-known names as Learning Hub Partners. In New York the startup partnered with the New York Public Library System, the largest library system in the US and Coursera’s first domestic Learning Hubs network. “Fitting we think that one of our first US Learning Hubs partners is located in New York, Coursera’s most popular city in the world by enrolment with more than 50,000 users located in New York City and 160,000 in the greater state of New York!” wrote the company.

Coursera claims that its Learning Hub program has produced some pretty inspiring results, including one Swiss professor who used the service in Dadaab, the world’s largest refugee camp, on the border of Somalia.

Along with that, the edtech company revealed these stats about the initiative thus far:

Coursera is located in Mountain View, California, and has raised $85 million in funding.