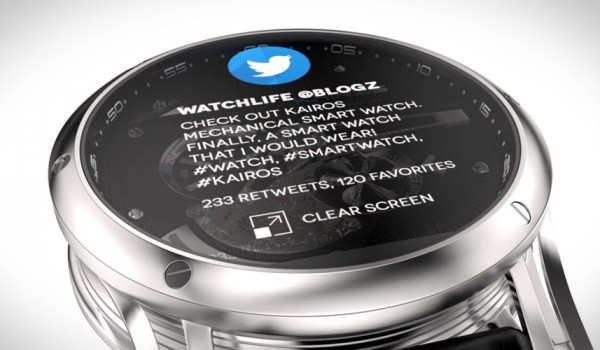 It seems like dozens of wearable tech blogs have already raved about the Kairos Smartwatch, and for good reason.

The yet-to-be-released watch is being touted (by its founder) as the “Hublot of Smartwatches,” since it’s a traditional swiss watch with a 0.1mm thin TOLED (Transparent Organic Light Emitting Diode) display. That means the watch’s surface turns 60 percent opaque when a notification from a synchronized smartphone comes.

What’s interesting about this South Korea-based startup is that founder Sam Yang is actually Canadian, as well as several members of the team.

The watch’s face will show notifications for SMS and email when tethered to user’s phon and will also show activity on apps like WhatsApp in the future. Yang also told TechinAsia that the team will soon make available an SDK so app developers can push useful notifications.

Other specs include BlueTooth support and a battery offerings five to seven days of regular use as a smartwatch.

And while experts are claiming a watch like this should go for over $1,100, the best part about is that Kairos Smartwatch is offering a pre-order only price of $499. The pre-order begins tomorrow and the product won’t ship until December.

Yang told TechinAsia that the Kairos is aimed at horologists – proper watch enthusiasts – rather than the usual smartwatch crowd. They’ll be selling the watch at luxury watch shops. “As smartwatches become more and more popular, consumers may become more and more dependent on their features,” Yang told the blog. “They may still have a Hublot or Rolex in their drawers but they may skip on wearing their ‘everyday watch’ for a smartwatch.”

Both Yang’s lofty claims about the watch’s claims, and the watch itself have generated significant buzz among the smartwatch blogs and enthusiasts. “The watch looks undeniably great compared to the Galaxy Gears and G-Watches of this world, although it should be noted that its parts are provided by a subsidiary of Citizen,” wrote WhatMobile. “A fine Swiss watchmaker, to be sure, but not quite Hublot.”

No product was revealed when Yang pitched at Startup Asia Singapore 2014 last week, but it nonetheless left critics impressed, and eager to see how the real thing will function, come December when it ships.

“Considering the fairly underwhelming and by-no-means-Swiss-made Samsung Gear 2 costs roughly $500, its not too much of a stretch to ask for double the price for what could well be double the product,” said WhatMobile.

CanCon Podcast Ep. 18: What can Canada learn from other tech countries?

Tech is often focused on what can be, but perhaps some time must be spent focusing on what should be. Canadian entrepreneurs often talk…