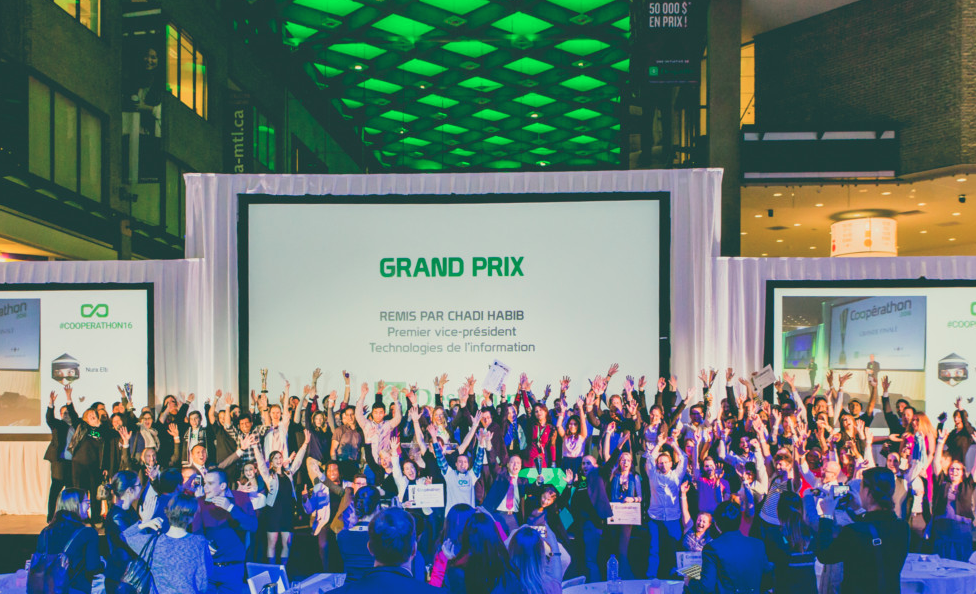 This past Friday night, the Montreal startup community, along with many of the city’s leaders in the fields of Health, FinTech, and Smart City innovation, came together at Place Desjardins for the finals of the 2016 Coopérathon. Created by Desjardins Lab and Hacking Health, with InnoCité MTL and Montréal, Smart and Digital City joining the event this year, the Coopérathon is a crucible for ideas. By pulling together Montreal’s most enthusiastic and innovative entrepreneurs, coders and creatives, the goal of the event is to make a social impact through innovation.

The challenge took place over four weeks, with numerous information sessions and workshops held to bring together potential team members and inspire their creativity. Participants also gained access to professionals in universities, private institutions, and nonprofits, along with specialists in smart city, technology, and design.

The night kicked off with speeches from the host organization and sponsors. Martin Brunelle, chief of strategy and innovation for Desjardins, spoke of the importance of cooperation for innovation. He noted that Montreal’s diversity — of culture, expertise, and people — makes it a perfect place to create real solutions for problems in our province and further afield.

There were further speeches from Dominique Anglade, Minister of Economy, Science and Innovation, and Minister responsible for Digital Strategy; Rita de Santis, Minister responsible for Access to Information and the Reform of Democratic Institutions; and Harout Chitilian, vice president of Ville de Montréal’s executive committee responsible for information technology and smart city, among others. The focus of their speeches were similar: that we’ve come together to see the extraordinary ideas and projects created in Montreal that will have a positive social impact and make a real difference in society.

The top fifteen teams of 95 projects had been selected to present short videos followed up by a “question that kills” from the jury for their category. Projects ranged from a device that allows people with restricted mobility to more easily get through wheelchair accessible doors (Sesame: ouvre-toi) to a matchmaking platform for financial advisors (Junius.io) and a system to better position babies in intensive care units (Positionne Moi).

The Grand Prize went to @Cœur — an online monitoring and teleconferencing system that will help simplify communication and care for cardiac patients. The team will receive a monthly stipend of $2,000 for three months following the event, as well as incubation, physical workspace, and access to both people and resources at sponsoring companies like Desjardins, IBM, and Ferst Capital Partners, as well as the Montreal startup community.

Desjardins Lab was pleased with the outcome and intends to hold the event again in 2017.

“Innovation doesn’t happen in a vacuum. It’s at the crossroad of ideas, action, and collaboration,” said Ilias Benjelloun, co-host of the event and entrepreneurship catalyst at Desjardins Lab. “The Coopérathon showed us that bringing together great minds, great partners, and collaborators, and giving them all time and support to build a team and work together provides solid game-changing projects.”

He continued, “I consider Coopérathon 2016, our beta; 2017, the ‘release’; and hopefully 2018, a ‘scale-up. If it all works out as we dream it, and with all our learnings from this edition, Coopérathon will become an amazing igniter of innovation, entrepreneurship, and social impact, for Quebec and beyond!”