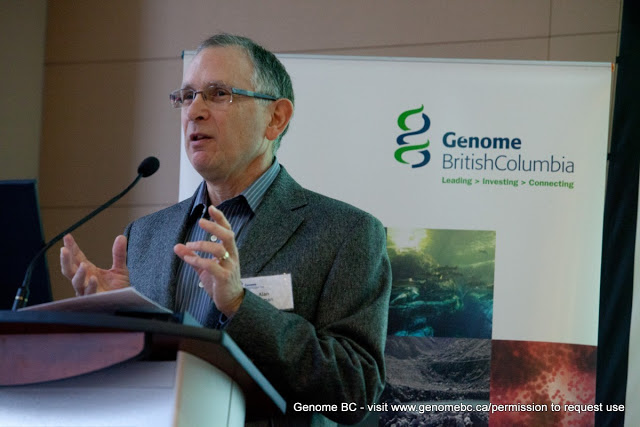 Collaboration is about taking action, and so many important technologies exist because business, academia, and government find ways of working together. In theory it sounds great. In practice, it’s often a disjointed dance of partners moving to very different rhythms.

These four leaders collective experience lent to an insightful evening. Dr. Winter might well be considered one of the “Godfathers” of BC Technology. Over the past 25 years, his roles have included being the founding president and CEO of the New Media Innovation Centre in Vancouver, the president of the ComDev Space Group in Ontario, and the president and CEO of MPR Teltech in Vancouver. During his tenure as President, six companies were spun out of MPR, including PMC-Sierra and Sierra Wireless. Prior to MPR, Dr. Winter worked for Telesat Canada and the federal Communications Research Centre in Ottawa.

Dr. Ouellette joined Westport Innovations at its founding in 1995 as chief scientist, while Dr. Thomas has been with Stemcell Technologies for 20 years. She’s seen the company grow from 8 people, to over the 500 it is today. Frost has over 30 years of management experience with a special emphasis on Brewpubs, and founded Central City in 2003.

Both Westport Innovations and Stemcell Technologies transitioned their labs at UBC to become leading global businesses in their respective industries. They maintain very strong ties to the research community today.

While brewing and distilling might not make tech headlines often, it’s very interesting how Frost sees their new partnership with SFU. It centres around teaching students the art of brewing & distilling. “We’ll have access to brain power at SFU. It’s exciting to think about having access to information we’ve never have before, like algorithms from math lab for instance,” said Frost.

Dr. Thomas points to the important role the NRC plays in the sponsoring of internships,and important Postdoctoral research.  For Stemcell Technologies, “our focus is all about servicing the researcher. It’s about staying ahead, and keeping close ties with academic community.”

“BC is not a hotbed of automotive engineers,” said Ouellette. “Having the ongoing collaboration with UBC has been crucial. Both graduate and undergraduates have become employees. The diesel engine might be 100 years old, but there’s still a vast amount of research to be done. To find new ideas, it’s important for us to keep the faculty engaged with our space.”

Most entrepreneurs aren’t hardwired for patience. These collaborations generally require an abundance of it. As Frost said, “academia moves like molasses. I’ve come to accept having to slow down, and realize the bureaucratic nature of the process.”

Ouellette addressed the question of whether or not government is doing enough in supporting business R&D. She said “the University has been fantastic, flexible, and really helpful with equipment and the sponsorship of grad students.” He tempered this by saying, “not all R&D can be done at university. We’ve probably gotten more help from US government than Canada. We definitely need to better address how our governments support industry R&D.”

Thomas adds, “look south, their programs are much better and more successful. The SBIR is just one such example, we should look at.”

Dealing with Intellectual Property can also present challenges with these collaborative efforts. Thomas estimates they have close to 132 different collaborations. “Licensing is important, as are anti-stacking clauses. Often research isn’t as far along a they think, so it’s best to avoid joint IP.”

Westport eventually bought the IP out right from UBC. From Ouellette’s perspective, “don’t let maybes be a distraction. Fund work that’s interesting. Deals need to be done based on risk.”

All three shared some key lessons that have been learned over the years. Frost is at the tip of the spear in creating BC’s distilling industry. He’s a natural-born entrepreneur: “I’ve been smart enough to do it, dumb enough not to worry about it. We’ve been at death’s door numerous times. It’s not a straight line to where you go, but it’s about understanding how to adjust. We always decided not to stop, stopping was not a choice”

Ouellette talked about the realities of their business plan, and how “the first version in 1994 called for raising $1.6 million and was projected to take 4 years. Well, it took ten years longer, and $250 million more than we planned. But some of the initial vision helped keep the business moving forward. It was a process of persistence.”

There’s no question that all stakeholders in this collaboration want to win the dance competition. It’s not always going to be the most elegant performance. But given the stakes, there are massive opportunities to be realized.