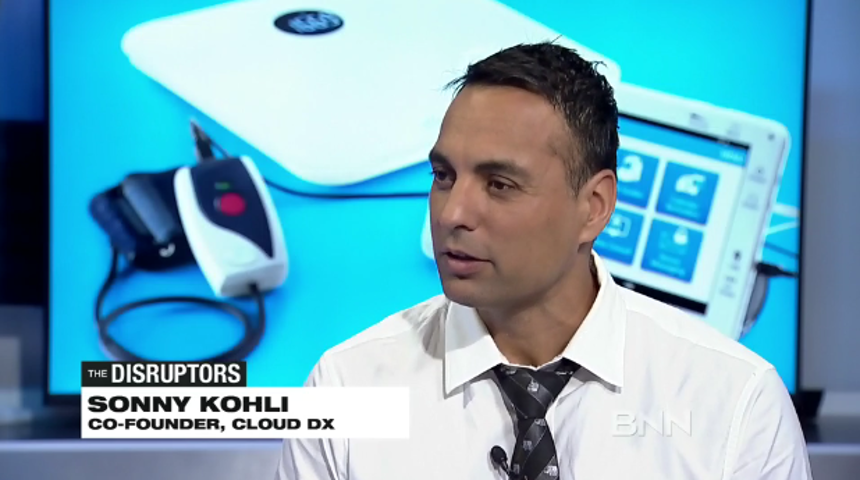 After another season of featuring disruptive startups from industries like FinTech and edtech, the top startup of The Disruptors latest season has been selected.

Toronto-based Cloud DX, which offers a range of precision vital sign monitoring equipment, took home the title. The company will get the chance to pitch to Croxon’s Round 13 Capital.

Co-founder Sonny Kohli sat down with co-host Amber Kanwar to talk about what Cloud DX does and its plans for the future.

Cloud DX, which pitched on The Disruptors back in March, offers a platform that is based around a tablet connected to a variety of Cloud DX’s own devices. The devices record data through surveys and symptoms the user is experiencing, such as blood pressure or heart rate changes. The data is then sent to Cloud DX’s cloud-based engineers for further analysis.

“Their next push is going to be to develop their artificial intelligence software, so it’s more than just collecting data and actually getting to diagnosis faster.”

Kohli said allowing patients to monitor and report on their health symptoms outside of a traditional clinic or hospital “could provide better care and maybe improve patient’s lives, and save money.” He added that the data Cloud DX has access to can be used to “provide predictive analytics, process information, and give meaningful insights.”

Kohli said Cloud DX’s plans for the future include building out its technology based on artificial intelligence.

“Our major focus is [that] we want to switch towards a heavy focus on artificial intelligence so we can start accessing all that raw data that we have in our cloud to give you insights,” said Kohli. “We do that at a reasonable level now, but we want to take it to the next level.”

Kohli added that working with artificial intelligence won’t disrupt the role and need for a physician, but instead allow physicians to focus their energy on other aspects of their job.

“A lot of physicians are bogged down with the day-to-day work that really takes away some of the work that interests them, some of the stuff that is really important to being a physician [such as] talking through people’s emotional issues, really focusing on the preventative health,” said Kohli. “[Physicians] can focus on some of your high-level questions instead of you being rushed out of the room.”

Kanwar said it’ll be interesting to watch Cloud DX closely as it tries to cut down wait times in clinics and hospitals, and develops its artificial intelligence software.

“Their next push is going to be to develop their artificial intelligence software so it’s more than just collecting data and actually getting to diagnosis faster,” said Kanwar.

Watch the whole interview below:

The Startupfest 2013 in Montreal was a grand success and the big $80,000 grand prize, which includes design and branding support, 1-year of free…