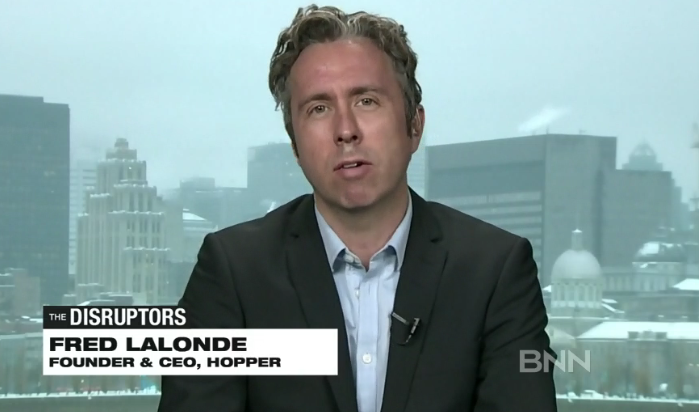 On the latest episode of The Disruptors, Frederic Lalonde, the CEO of Hopper, discussed how the Montreal-based company went from being a struggling startup to a leader in the mobile travel space.

Lalonde said when Hopper launched, the company’s focus was to help people choose their travel destinations and book flights online. When Lalonde realized that people weren’t really interested in Hopper’s initial service, he found an opportunity when he noticed the anxiety travellers have around trying to figure out the best times to book the cheapest flights.

“We were collecting so much data that we thought there might actually be an opportunity to forecast, just to look at the future behaviour of pricing,” said Lalonde.

“Always try to build not where the world is now, but where it’s going.”
– Frederic Lalonde

Hopper, which began as a web-based company, has now become a mobile-only, data-driven platform that analyzes billions of flight prices to predict when travellers should buy their tickets and where they should fly. In September 2016, it added a “watch filter” to its app, which allows users to set flight preferences and in turn, find the best tickets based on the type of flight they are looking for.

In the interview, Lalonde also explained how the company’s shift to a mobile-only platform has been key to its growth and scalability.

“If you look at it today, about 50 percent of all air and hotels are now booked on phone; this is globally around the world,” said Lalonde. “The idea of being focused on mobile only with a product that really nobody competes against, which is the forecasting, but also the ease of use on mobile is putting us in a position where we are by far the most downloaded air app in the United States.”

For other startups that also run into a situation that requires shifting the company’s focus, Lalonde offered two key pieces of advice.

“First of all, choose the right investors. Taking money is one thing but if you can take it from people that share your vision and will be with you when things are going not so great, that’s going to make a huge difference,” said Lalonde. “The second this is to always try to build not where the world is now but where it’s going. It’s much better to pick a trend that you believe is going to become mainstream before it develops.”

In December 2016, Hopper raised a $82 million Series C led by Caisse de dépôt et placement du Québec. The company is using the money raised to further innovate its product and expand to “over 100 markets in the next two years.”

BetaKit is a production partner on The Disruptors. Tune in to BNN every Thursday night at 7 p.m. for full episodes!

Cambridge-based eSentire has acquired Seattle-based Versive, which allows enterprises to map out their cybersecurity capabilities and react quickly to attacks. With the acquisition, eSentire…