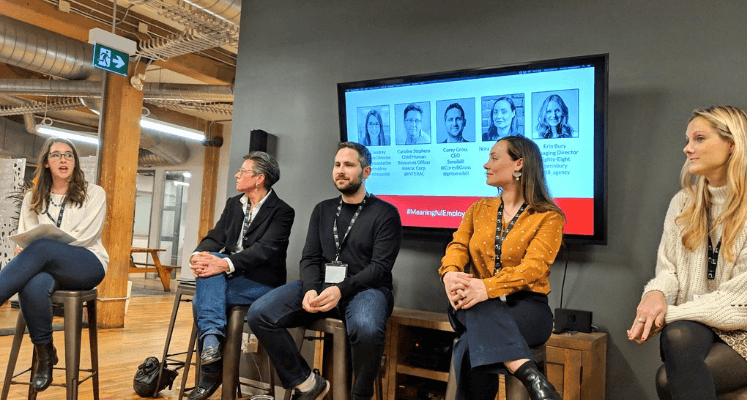 Transforming from a traditional payments network into a 21st-century innovator is a difficult process. No one knows that better than Chief Human Resources Officer at Interac, Caroline Stephens. The executive team brought Stephens in almost two years ago to help refactor the culture at Interac, acknowledging the crucial part that people play in a businesses’ transformation.

Stephens recently spoke at a Toronto event organized by the Upside Foundation on creating Meaningful Employee Experiences. Also featuring panelists from Eighty-Eight, Bright+Early, and Sensibill (the venue host), the evening focused on how innovative businesses attract and retain talent. BetaKit spoke to Stephens one-on-one after the panel to understand how Interac is focusing on employee experience and culture to drive business results.

A “pivotal moment” at Interac

Any startup will tell you it’s difficult to recruit the best people with limited resources and an unknown brand. Stephens told BetaKit that it’s equally, if not more, difficult when your business has the resources, but exists in an industry fighting against the “stodgy” perceptions of Bay Street and traditional financial services, and a heritage of being an association.

“When I came on board, executives said we were at a pivotal moment,” Stephens said. “That we were moving into digital modernization. That we needed to re-tool and we need different kinds of skill sets.”

The pace of change was dramatic. In 2018, Interac reorganized from an association into a single corporate entity, Interac Corp., growing its employee base by 24 percent, with plans to grow another 30 percent in 2019.

But for Stephens, the ability to keep pace with the technology transformation depended on a very human element. Some Interac employees had been at the company for over a decade, so working with them to re-tool and skill-shift the workplace was critical.

“The first thing to do is listen to employees,” she said. “Asking, ‘if you could be more empowered, what would that look like?’”

Empowering Interac employees required changing the way they were organized. Initially a hierarchical organization, executives told Stephens Interac needed to “flatten the organization a little bit and create cross-functional teams to collaborate together towards a common outcome.”

Stephens explained the value of a collaborative model for an organization like Interac. In a hierarchical environment, employees are more likely to be focused solely on optimizing for costs within their department. In a more collaborative cross-functional environment, those employees have more opportunity to focus on customer needs.

“If you’re working as an individual, you say ‘this is my function,’” said Stephens. “The conclusions you may come to would be very different in that kind of a scenario than if you were working in a whole team that says, ‘it’s whether or not we get the product out the door in the way the customer needs it.’ Now, you may change your original thinking in favour of that common outcome.”

During the panel conversation, Nora Jenkins Townson, founder of HR consultancy Bright+Early, suggested that providing time flexibility to employees is the best perk you can offer. She went so far as to say it’s a better perk than more compensation in many cases. Stephens agreed with Jenkins Townson’s sentiment about offering time flexibility to employees, saying that “it’s about caring for the people you are around.”

With more cross-functional teams and personal time flexibility, however, companies lose the comfortable assumption that everyone will be in the office at the same time. As an organization grows, the diverse web of working times and teams becomes even more complex.

“You have to create other channels for people to be heard,” explained Stephens. “We have multiple town halls. We have all-staff meetings. We put out multiple communications. And the CEO still has an open-door policy – it doesn’t matter who you are, whether junior analyst or product lead.”

Recruiting for the culture you want to build

Stephens noted that as Interac underwent its organizational transformation, recruiting became a strategic tool to attract the right people. Specifically, that meant people able to both contribute to the great parts of the existing culture at Interac while pushing ahead towards the new culture necessary for growth.

“We get people who ask, ‘what do your people say about working at Interac?’ We take every opportunity to show people who we are.”
– Caroline Stephens

“Being able to operate in an agile environment, and not be afraid to put your ideas on the table, and collaborate with like minds and diverse minds to come up with that proof of concept is really what you’re looking for,” she said.

In order to find those people, Interac responded to a shift in the overall talent market: top talent wants to know who the company is not just what the company does. To get that message across, Stephens said Interac is leveraging video, social, and external speaking opportunities.

“Even two years ago when we were recruiting, people would say ‘what is compensation, what is the role, what is the risk?’” said Stephens. “That’s not what we get anymore. What we get now is people who ask, ‘what do your people say about working at Interac?’ We take every opportunity to show people who we are.”

Showing prospective employees who you are also requires knowing what your company is about. For Interac, that includes corporate social responsibility (the company, for example, is an Innovation Sponsor of the Upside Foundation). Stephens told BetaKit that to establish a culture of giving back at Interac, she followed a familiar playbook: talking and listening to employees.

“We ask our employees what’s important to them,” she said. “We have to make sure we are true to our values and that we give back into the community. We have a number of initiatives and causes we support, from the Jr. Economic Club of Canada to United Way, but equally important is when employees come to us and say, ‘this is important to me, how can we work together?’”

Stephens has had to connect several dots to help transform the culture at Interac from a financial association to a FinTech innovator: humanizing the talent brand, overhauling the work environment and recruiting processes, and creating space for communication and collaboration. Now, she’s focused on finding people who know “where the puck is going to be,” to use her favourite sports metaphor.

“If you really find a gem in the marketplace, it’s somebody who can think way ahead,” she said. “If you think about Wayne Gretzky – he goes where the puck is going to be. Those are the kinds of folks we’re trying to bring in.”

Four Toronto-based healthtech businesses and organizations have received a cumulative $13.4 million in loans and grants from the federal government, through FedDev Ontario. The…