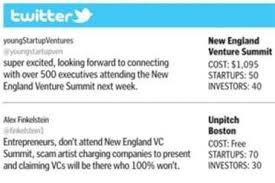 A New York Times article described the fued well. Essentially it was an event that “costs as much as US$1,095 for attendees to hear tips from more than 40 venture capitalist”. The day-long event involved startup founders pitching their companies, panel discussions on the latest technology trends and networking among investors and entrepreneurs. Major VC firms Birchmere Ventures, Covidien Ventures, and Excel Venture Management were expected to have attended.

The Boston community obviously didn’t like the concept and came up with their own “Unpitch” event. Spark Capital investor Alex Finkelstein even went as far as tweeting “Entrepreneurs, don’t attend New England VC Summit, scam artist charging companies to present and claiming VCs will be there who 100% won’t.”

The whole issue points at whether it’s morally right to charge people money to get in front of others who could (eventually) give them lots of money and advice. It struck a nerve here in Canada in March when the occasionally fiery David Crow of the StartupNorth blog argued against it. That was followed by more wrath from his buddy Jevan McDonald, who wrote  If not an Angel Network, then what? and The only model that matters: Founders First. It was all in response to the First Angel Network (FAN) in Atlantic Canada, a group that charges $3,000 for an hour to pitch their company, coupled with a “working dinner with some of the most successful business leaders and angel investors in the region”.

Needless to say, FAN didn’t win over too many fans with their recent escapades.

I asked three Montreal-based investors what their thoughts were. Largely they all said the practise is frowned upon, but at times can be acceptable.

David Nault at iNovia Capital offered that “I do not see why an entrepreneur should have to pay to pitch. It is the VCs business to meet entrepreneurs and listen to pitches.  If an entrepreneur cannot get meetings then it says something about them and/or their business.”

“I don’t think peoples’ ability to pay $1000 is a valued measure of the quality of their company,” said Stokes. “If I judged people on the basis of who could afford to pay to pitch me or who could afford my time, I think there’s a hell of a lot more better indicators of a company’s ability.”

Austin Hill, who I once referred to as the “Don” of Montreal’s angel investing community, offered an interesting response. If a startup feels they have to do that, then all the power to them. “Generally I frown upon it but some companies have had success with them,” he said. “It’s really up to your resources and who’s in the audience but for the most part VCs are very easy to meet and want to meet with you, and in most cities you can just go to networking events to be able to get in front of them.”

But events always cost something to produce, said Hill. Whether the money comes from sponsorship or charging people to come, it has a price tag. He said with Techcrunch disrupt, certain companies are chosen and appear for free, while others are “sometimes offered a slot in the waiting areas and they pay to have a booth, so they’re paying for presence in a very highly populated startup conference. Certainly those things have happened.”

In the end “its up to any company to do their due diligence and decide whether they should be there.”