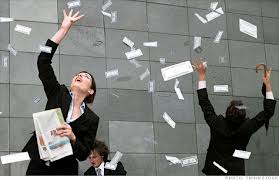 Contrary to our “build Canada’s billion dollar company” cheerleading, Canadian startup founders are apparently not intent on building longterm businesses in this country.

Rather, they want get acquired, but they’re not always prepared to do so.

The new data put forth this morning by PwC’s 11th annual Emerging Companies Survey indicates that Canadian startups want to be acquired, and aren’t thinking about building for the long haul.

Nearly eight of out ten founders (78 percent) want some sort of exit strategy, while nearly two-thirds (63 percent) of all respondents are eying an acquisition.

“The results show that Canadian startups are not looking to build business for the long term—instead, they want to build to a proof point and then sell,” said PwC’s Eugene Bomba. “This trend impacts the made-in-Canada market, as with so many companies looking towards an acquisition, it’s expected that large US companies will be looking to acquire Canadian businesses predominantly for talent through M&A activity.”

The report also indicated a seemingly pessimistic view among Canadian startups regarding an IPO potential, which is affected by seeing other prominent Canadian technology companies on the market (69 percent of founders said so). And with “many recent high-profile technology IPO flops in the US,” appetite in Canada is apparently low. As a result, investors are putting new technology IPOs under much more intense scrutiny and demanding clear signs of traction, critical mass, growth potential and, most importantly, revenue generation.

“Despite seeing better valuations in the public market recently, most emerging companies still aren’t willing to take the risk to IPO,” says Bomba.”The costs associated with going public are often too high for a small business to assume, particularly given the recent IPOs that have stumbled out of the gate.”

Even though our startups want to be acquired, many exhibited a “startling lack of acquisition preparedness.”

Less than a quarter (24 percent) have reviewed or audited their financial statements and only 11 percent have completed a formal valuation. “Perhaps most concerning,” wrote PwC, is that a significant percentage (22 percent) have taken no steps towards preparing for a sale.

“While exiting through acquisition doesn’t bring about the same level of scrutiny as an IPO, M&As do carry their own set of challenges and require a significant amount of due diligence,” says Bomba. “A major component of a successful acquisition is preparedness, so that when the time is right companies are in the position to negotiate a strong sale.”