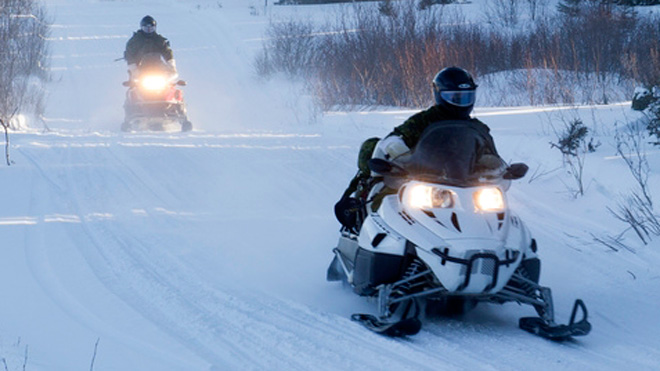 When the Canadian Military wanted to reinvent the snowmobile, they didn’t have to look far for help.

Reaching out to manufacturers in 2011, they put out a tendering document with specifications for its dream snow machine: fast, silent, long-lasting, and top secret. The Canadian Press has recently learned that the project was awarded to a Waterloo-based hybrid and electric vehicle manufacturer called CrossChasm Technologies.

Nicknamed “Loki,” the stealthy hybrid military machine has reportedly been tested informally by Canadian Forces Base Petawawa in February. Those tests have included radar guns, sound-meter readings, and rough terrain, to determine how far and fast the silent snowmobile can go.

“These experiments compared Loki against commercially available snowmobiles already in use, testing a wide variety of the snowmobiles’ characteristics, including speed, towing capacity, endurance, mobility, usability, and of course, noise emissions,” says the heavily redacted report, acquired under the Access to Information Act by the Canadian Press.

While the initial tender specifies that the bids could not exceed $550,000, the contract obtained by the Canadian Press indicated that the price tag was later changed to $620,000.

News of the stealthy military snowmobile project comes just days before Prime Minister Stephen Harper is scheduled to arrive in the arctic for a six-day tour of the region. While his main focus has shifted towards promoting economic development, the Loki project proves there is still an emphasis on improving the country’s arctic military capabilities in the far north.

CrossChasm Technologies, which also has offices in Montreal, focuses on developing next generation hybrid, electric, and plug-in vehicles of all kinds. The company has been awarded Deloitte’s Technology Green 15 award two years in a row, and contributed electrical systems support and powertrain integration for the RESOLVE lunar rover, developed by CSA and NASA.

Source: Cross Chasm
Via: The Record

The many analytics tools available to help startups evaluate their company success can make the process of looking at company viability daunting; is it…