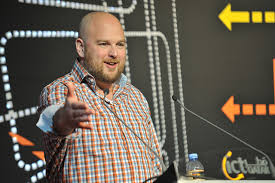 Canadian Gabe Zichermann was born and raised in Toronto, but for the last decade he’s built himself up as one of Silicon Valley’s few gamification experts. In fact, he’s written three books on the subject and is now set to host the fourth annual GSummit San Francisco, a conference on gamification.

“We’ve been doing it since 2011 and the goal of it is to bring together all the people in gamification and engagement in the world, across a wide range of subjects,” he told BetaKit. “Folks who are doing it in health, science, marketing, all kind of come together and the idea is the share as much as possible with each other and to really figure out what creates engagement.”

There are some interesting folks attending the conference (including a lot of Canadians). Keynotes include Neil deGrasse Tyson, the well-known American astrophysicist, author, radio personality, and science communicator. Also keynoting  will be Dr. BJ Fogg, who directs the Behaviour Design Lab at Stanford. An experimental psychologist, Fogg has created “breakthrough methods” for changing human behaviour.

Also keynoting is Jane McGonigal, a PhD who is a world-renowned designer of “alternate reality games” (games that are designed to improve real lives and solve real problems.)

So how did the Canadian Zichermann end up being in the position he’s in today? And how did he foresee five to seven years ago that gamification techniques would become so big in helping brands monetize loyalty problems?

For Zichermann, “a few things came together,” namely that he thought loyalty programs like Aeroplan were a lot like games. “I felt like I was ‘playing’ Aeroplan. And a lot of the things that they’re doing is similar to the mechanics of games, and so that was my first train of thought. Then I looked around and thought, ‘man, a lot of these loyalty marketing campaigns are really really boring.'”

He said some interesting things that resonates pretty clearly today, like how at the time he realized “people seemed to be increasingly distracted as the smartphone came into the world. It was like more and more people started to spend the whole day looking down.” Companies like the social game developer Zynga were emerging and Zichermann was bent on figuring out how businesses could compete with the Zyngas.

“How do you get people out of Farmville or Candycrush long enough to do their job? And that was really my main insight,” he said. “You almost have to start thinking like a game company to get your customers and employees to think about the work they’re supposed to do.”

His three books were published between 2010 and 2013 and explain many of his theories and approaches to how businesses can increase user engagement through gamification. He co-wrote “Game-Based Marketing: Inspire Customer Loyalty Through Rewards, Challenges, and Contests” in 2010 with NPR contributor Joselin Linder, which explained the game mechanics that helped make FarmVille and Foursquare so successful.

The GSummit San Francisco 2014 conference, meanwhile, is set for June 10-13, and Zichermann himself will be teaching a workshop. Participants get to present their own case studies with their own businesses and Zichermann helps them formulate a proper gamification strategy to increase brand loyalty.

I naturally assumed that he would one day return to his home country. He had a nice laugh over that one. “My whole family is still in Toronto and I’m home four or five times a year. It’s a really frequent topic of conversation in my house, unsurprisingly. One thing I will sat is that growing up, Toronto really didn’t have a lot of really interesting high tech opportunities for someone. You wouldn’t think of doing startupy-type things in Toronto, and now every time I go back to the scene everything’s getting more interesting, more vibrant and bigger

Being from Toronto, he’s pleasantly surprised at how the tech community has transitioned since he graduated from the University of Waterloo years ago. He said 75 percent of his graduating class went on to work for BlackBerry (then Research in Motion), or Nortel. “In the past the Canadian tech scene was all about these big national champion companies, and now its more about startups. Toronto is getting more and more interesting.”