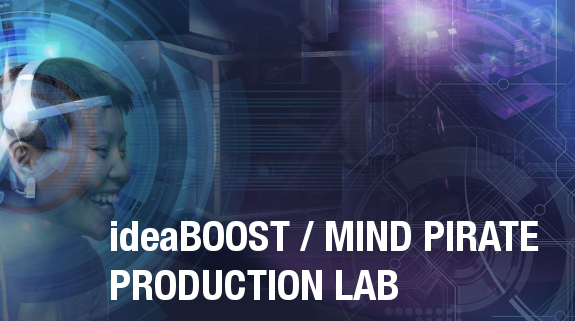 I hope all the wearable tech people are paying attention to this cool story that came our way this morning:

The Canadian Film Centre (CFC) and the Bay Area-based wearable technology company, Mind Pirate, are launching a program that will give select developers or companies the opportunity to create games and apps for the next consumer “mega trend” of wearable technology.

Up to six U.S. and Canadian developers or companies will be selected to join the three-month ideaBOOST/Mind Pirate Production Lab, where they will use Mind Pirate’s next-generation game platform, Callisto, to create products for mobile wearable devices, like Google Glass. Callisto does not release publicly to third parties until 2014, “making ideaBOOST/Mind Pirate Production Lab program participants among the first in the world to get their hands on this next-generation technology.”

“We are thrilled to be providing best of breed developers or companies with this unique opportunity. Through our digital entertainment accelerator ideaBOOST, the CFC is at the forefront of taking business mentoring techniques from the lean start-up movement and applying them to the media and entertainment industry,” said the CFC’s Ana Serrano. “With the ideaBOOST/Mind Pirate Production Lab, we can direct these proven prototype development and lean business acceleration methods towards the creation of wearable technology experiences.”

Select products from the program may be published and brought to market at a future date. Together the program is using CFC’s ideaBOOST accelerator program and Mind Pirate’s technology and expertise.

“Having participated in ideaBOOST as a board member, I knew it would be an ideal forum to give developers the opportunity to create exciting, new experiences for the wearable technology megatrend using our Callisto game platform,” said Mind Pirate CEO Shawn Hardin.  “Callisto is the only wearable technology game platform on the market; it gives developers the tools to create engaging experiences that merge the virtual and physical worlds. This program is perfect for developers who are ready to take the leap into the next-generation of gaming.”

Callisto is the market’s first and only tightly integrated client-side and server side game-focused platform that supports leading mobile devices with a special emphasis on “wearables” such as smart glass and smart watches. It enables developers to create engaging experiences that merge the virtual and physical worlds.

Interested potential applicants can start submitting applications on October 2 here. The application deadline is October 22 at 11:59 p.m. PST. The program will begin November 20 at the CFC headquarters in Toronto.

Meanwhile, founded in October 2012, Mind Pirate “takes full advantage of what is most unique about current smartphones and next-gen mobile computing devices to deliver cutting-edge games and technology.”