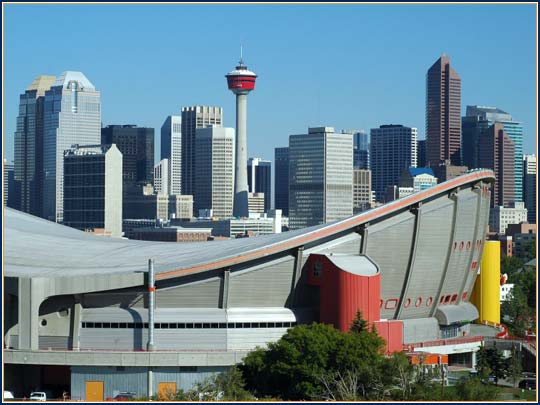 Yesterday’s report issued by the Canadian Federation of Independent Businesses (CFIB) threw Canada’s entrepreneurial landscape a curveball it likely didn’t see coming: Calgary is the top place to run a business in Canada.

(For people who pay close attention to these reports though, it wasn’t surprising. Calgary was named the top city in 2012 too).

The report, entitled “Communities in Boom: Canada’s Top Entrepreneurial Cities 2013,” listed the Greater Calgary area with the top score, with 68 points out of 100. Saskatoon came next with a close 67, and Toronto jumped up two spots from its 2012 ranking to third place.

The report explained that historically, the CFIB has found the entrepreneurial spirit to be strongest in Canada’s prairie cities and the urban areas that ring large urban cores. “What they have in common is ‘newness’—the prairie economies have only been developed in the past 150 years or so. Only a few generations separate today’s urban prairie residents from their entrepreneurial forbearers.”

CFIB chief economist Ted Mallett said growing communities raise property values, utilize infrastructure more effectively and provide residents with a greater range of economic and social opportunities. “While we recognize communities that do this well, it’s important to acknowledge that all Canadian cities could do much better, particularly in addressing fairness issues around business property tax.”

Indeed, there were a few cities that didn’t fare too well in the report, including Quebec City, Kingston and Montreal. The annual report attempts to identify cities’ relative entrepreneurial strengths and weaknesses, looking at 14 indicators applied to 3 main categories (Presence, Perspective and Policy), to arrive at a score out of 100. Cities had to have at least 25,000 people.

“Some measures of what makes a “boom-town” are obvious, such as a high concentration of entrepreneurs and a high business start-up rate,” said Mallett. “Other indicators are not as obvious, like the level of business optimism and supportive local government. Notice we have no hundreds on the board. These cities are leading the way, but even they can stand to improve in one area or another.”

Speculating on Calgary’s win, the report suggested that one often sees higher entrepreneurial activity in resource regions, although  these economies can suffer from wider boom and bust business cycles. “Favourable resource development conditions will attract businesses seeking to service increased activity—and, when conditions deteriorate, a strong base of experienced business owners often becomes the primary pillar of community support.

When it came to “entrepreneurial perspective”, where entrepreneurs remain the most up-beat about their future, St.John’s, Saguenay (Quebec) and Saskatoon all placed the highest with a score of 24 out of 35. Meanwhile for policy, in which local governments are trying to institute productive rules for business, Edmonton, Calgary and Saskatoon were the top cities.

So what makes an entrepreneurial city? Well, the report couldn’t (or wouldn’t) really put its finger on one reason. It listed many factors that help in this regard: residents who form a sense of loyalty and belonging, the health and growth of those communities, the attributes of location and proximity to bigger cities.

But despite the millions of influences that affect community growth, “nothing would happen if it weren’t for individuals making entrepreneurial decisions to hire, invest or innovate,” reads the report. “The more of those people in a community, the stronger the growth that follows.”

John Doherty is the founder of Credo, a platform for connecting great businesses with the best vetted digital marketing consultants and agencies. He took…