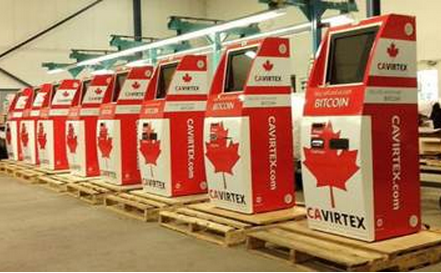 Bitcoin ATMs- or more specifically, “BTMs” started appearing in Canada last year, with the first one appearing outside a coffee shop in Vancouver.

Today CAVIRTEX, a a Toronto Bitcoin exchange and service provider that calls itself Canada’s largest, announced its plans to roll out ten more BTMs across the Greater Toronto Area (GTA) and Canada.

With today’s launch of six new BTMs in Toronto and four more to roll out across the country shortly, Canada now has more BTMs than anywhere else on the planet. Over 30 currently grace the soils of our nation.

The fleet of BTMs are located in high-traffic Gateway Newstands locations across the Greater Toronto Area. CAVIRTEX plans to install an additional four machines in Vancouver, Niagara, Ottawa and Halifax. CAVIRTEX BTMs are capable of buying and selling up to $3,000 CAD worth of Bitcoin exclusively in the Canadian marketplace. The machines are built by Ottawa-based hardware and software provider BitAccess.

“Launching these Bitcoin Teller Machines in Canada is a significant milestone that will let anyone with a cell phone and cash buy Bitcoins instantly” said CAVIRTEX CEO Joseph David. “It’s a big first step working with BitAccess and Gateway Newstands, and as demand increases we plan to install more BTMs across the country.”

Bitcoin is the world’s first decentralized digital currency, maligned by governments but embraced by techies. Canadian businesses have played an important role establishing cryptocurrencies as a viable option for merchants and consumers.

CAVIRTEX was founded in 2011 as a Calgary-based startup and Canada’s first Bitcoin exchange. Over three years the company facilitated more than $90 million in trading between early adopter Canadian merchants and individuals. Developers of the latest CAVIRTEX BTMs, BitAccess, also began as a Canadian tech startup and are now world leaders in BTM technology.

Terry Samuels, Vice President Gateway Newstands, said of the forward-thinking partnership, “we have been in business for 30 years and even though we are well established, it is important to stay current.”

“Our high traffic Gateway Newstands locations provide us the opportunity to innovatively step up to the plate,” added Samuels.

CAVIRTEX has connected the new BTMs directly to their online trading exchange. In order to buy Bitcoin instantly and in-person with Canadian cash, the customer only needs a cell phone that accepts text messages. Users then have the choice of scanning a QR Code with an existing bitcoin wallet smartphone app or getting a paper wallet from the machine. CAVIRTEX plans to continue working with BitAccess with intention of installing BTMs in the more than 500 locations in the Gateway Newstands network.

Beyond the latest BTM fleet launched in Toronto BitAccess has established machines in Ottawa, Montreal and most other major Canadian cities. There are now more than 30 machines in Canada.

Bitcoin is a decentralized digital currency. Its peer-to-peer payment system and currency was introduced as an open source software in 2009, allowing users to pay for goods, services or transfer funds without involving third parties or financial institutions.