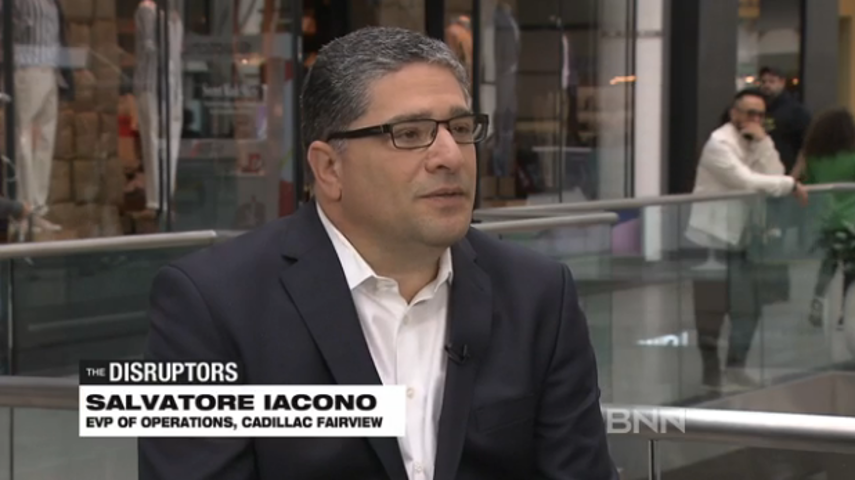 On the latest episode of The Disruptors, co-hosts Amber Kanwar and Bruce Croxon sat down with Salvatore Iacono, executive VP of operations at Cadillac Fairview, which owns the Toronto Eaton Centre, to discuss how malls can embrace change brought on by technology in the retail space.

During the interview, Iacono provided background about Cadillac Fairview, highlighting that the company owns “no less than 19 shopping centres in Canada.” He said 11 of these shopping malls are amongst the top 20 most productive malls in the country.

While Kanwar and Croxon suggested that sales for traditional mall retailers are slowly declining as more consumers turn to online shopping, Iacono said malls continue to see lots of traffic.

“We have an excess of 50 million people a year that shop through our property here.”

“Here we are at Toronto Eaton Centre, where it is literally the most trafficked, busiest mall in all of North America,” said Iacono, who agreed that focusing on a higher-end retail experience is key to success. “And we have an excess of 50 million people a year that shop through our property here.”

When asked about what it takes to bring so much traffic into Canadian malls despite disruption happening in the retail sector, Iacono said it comes down to knowing what consumers want and understanding the best way to meet their needs, whether it is bringing in better food options or more parking space.

Kanwar pointed out that in particular, malls seem to be surviving because of a focus on services that can’t be bought online, like massages or a cup of coffee. Iacono said this was the “basic goal,” of Cadillac Fairview.

“As long as human beings remain human beings, we’re very confident that by us owning and operating the best malls, we will be able to not only respond to what the consumer demands in terms of all those experiences…but at the same time, we create this virtuous circle,” said Iacono. “The more we have these customers wanting to come to our properties, the more we’re also better able to attract all the best-in-class retailers.”

Mortgages can be complicated and intimidating, but one Toronto-based company is trying to make it easy enough to do yourself. Do Your Own Mortgage‘s…