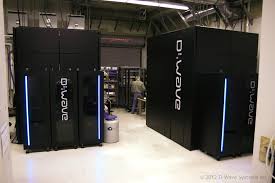 Ever since Burnaby’s D-Wave Systems landed on the cover of TIME magazine a few months ago it seems that everything the quantum computer-maker does is under a tight microscope.

Basically D-Wave Systems is creating a super high-powered computer that’s already being dubbed “the Infinity Machine.” Quantum computers could represent an enormous new source of computing power, with the potential to “solve problems that would take conventional computers centuries, with revolutionary consequences for fields ranging from cryptography to nanotechnology, pharmaceuticals to artificial intelligence,” as TIME wrote.

Today’s news is a little less buzzy than than a few months ago but nonetheless interesting: D-Wave has partnered with two firms that do complex solution work in the medical and genomic data field, and the finance field.

“Quantum computing will reach its full potential through collaborative partnerships with pioneering organizations like DNA-SEQ and 1QBit, who are working to solve incredibly complex problems,” said D-Wave CEO Vern Brownell. “Combining our expertise and technology with experts in fields like cancer research and finance is starting to produce remarkable results. From creating more targeted and effective cancer therapies to optimizing financial portfolios, quantum computing applications are already having real impact.”

The company is working with clinics to identify novel treatments for cancer patients that have developed resistance to therapy. DNA-SEQ has also begun to collaborate with the USCD Pediatric Diabetes Center to implement its technologies in the field of stem cell research.

D-Wave and 1QBit will both be presenting about their respective technologies on June 10th at the Exponential Finance conference at Lincoln Center in New York City.

Founded in 1999, D-Wave’s mission is to integrate new discoveries in physics and computer science into breakthrough approaches to computation. The company’s flagship product, the 512-qubit D-Wave Two(TM) computer, is built around a novel type of superconducting processor that uses quantum mechanics to massively accelerate computation.

In 2013, D-Wave announced the installation of a D-Wave Two system at the new Quantum Artificial Intelligence Lab created jointly by NASA, Google and USRA. This came soon after Lockheed Martin’s purchase of an upgrade of their 128-qubit D-Wave One(TM) system to a 512-qubit D-Wave Two computer. With headquarters near Vancouver, Canada, the D-Wave U.S. offices are located in Palo Alto, California and Vienna, Virginia. D-Wave has a blue-chip investor base including Bezos Expeditions, Business Development Bank of Canada, Draper Fisher Jurvetson, Goldman Sachs, Growthworks, Harris & Harris Group, In-Q-Tel, International Investment and Underwriting, and Kensington Partners Limited. For more information, visit:

The Centre for Social Innovation (CSI), in partnership with over 30 organizations across Ontario, is launching Soshent.net, a digital platform for social entrepreneurs and…