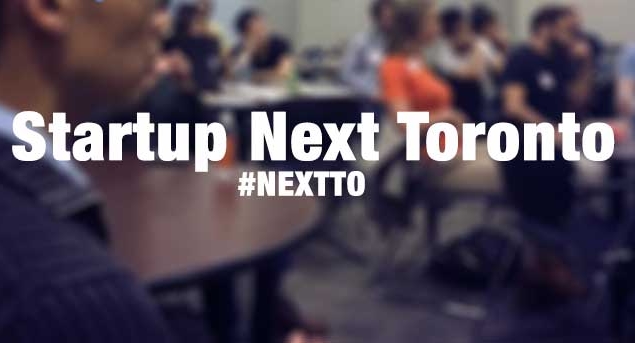 Last Friday I spent my evening at a startup pitch competition, which, considering my position, is to be expected. I never expected to actively root for the founders pitching their companies.

I couldn’t help it; they were my founders.

Six weeks ago, MaRS and TWG teamed up with Techstars to launch the latest cohort of Startup Next Toronto (#NextTO), a pre-accelaration program pairing entrepreneurs with select mentors to help get their business in order.

“There are a lot of unanswered questions as an early stage company,” Nathan Monk, one of #NextTO’s organizers, said while describing the program. “It is incumbent upon us to help those companies find the answers to validate their business models. We help them build something folks want before time and resources run out.”

As a media sponsor, BetaKit had been invited to participate throughout the program. We couldn’t say no.

As a media sponsor, BetaKit had been invited to participate throughout the program, which provided a compelling opportunity: watch the startup sausage get made, from early concept to polished pitch. As journalists, we often see the output of an entrepreneur’s hard work without insight into the process behind it; we couldn’t say no.

I didn’t expect it to be so bloody.

The weekly cadence of #NextTO was thus: each startup in the cohort would pitch their company, and the mentors would then rip them to shreds; the next week, the startup would return, demonstrating lessons learned, to be torn apart again for aspects of their business presently unconsidered.

At the earliest stages, when a company is struggling to figure out what it is, let alone articulate that message, the ‘feedback’ can be quite brutal. The process wasn’t vengeful, however, but it was necessary, and fuelled by passionate mentors eager to prevent a new generation of entrepreneurs from falling into common startup traps.

“Versus previous cohorts, we had a deeper mentorship pool including alumni of #NextTO (Marie of Sampler, Rob of BrewBox, and Mike of FourWalls), plus many returning mentors who know the program well,” Monk said. “In addition, we brought new perspectives to the pool, including Alex Lynn of HIGHLINE VC, leading management thinkers like Alan Smith of Strategyzer, and experienced founders who have exited, like Craig Follett of Universe (recently exited to LiveNation). This mentorship pool, combined with an intense selection process and incredible leaders from the investment community as judges, made this cohort very strong.”

At program start, I was shocked and awed by the way each mentor could clinically dissect the flaws in a business model, or challenge a founder on exactly what problem they were trying to solve. By the third week, I was throwing stones myself, attacking any entrepreneur unwilling to embrace the need for quality storytelling in their pitch.

But embedding with the mentors had a secondary effect: I was invested in each startup I was tearing down to build up. By program’s end I felt like a proud parent as I watched each startup deliver killer pitches to a judging panel filled with major players in the Canadian startup ecosystem. Journalistic objectivity was thrown out the window; I was invested.

#NextTO’s mentor panel was filled with empathy and real talk.

It was a sentiment shared by Marie Chevrier, founder of Sampler (a prior #NextTO winner) and a mentor for this cohort.

“Every team came to Demo Night with their A game,” Chevrier said. ” Their presentations had improved so much even from just the week before. I was so proud to see all of our feedback taken into consideration and to see them rise up to the massive opportunity of pitching in front of the awesome judging panel that was selected for the event.”

As a former #NextTO participant, Chevrier had a unique perspective out of all participating mentors. Talking with her after the event, it was clear Chevrier commiserated with a cohort striving to turn the weekly bruises into business muscle.

“I felt so nervous for them every single week,” she said. “It’s not easy to constantly have your idea be challenged week after week. In the end though, I know it will have been the most intense learning experience they’ll likely ever get so I felt the best thing I could do is just to encourage them to keep going and keep reiterating based on the feedback. It’s really one of those things where what you put into it is a clear indicator of what you’ll get out of it.”

It was clear that each startup got out what they put in, as the full cohort of eight startups delivered solid to exceptional pitches during Demo Day. In the end, someone had to be named winner, and Loop Lab took home the prize and an opportunity to represent #NextTO at future Techstars events.

Loop Lab won the crowd over with their humble nature and killer product.

Speaking with Loop Lab after the event, co-founder George Polack was quick to acknowledge both the challenge and rewards of #NextTO. “Each week was like walking into a boxing ring against 20 people,” Polack said. “But it was also like having a team of 20 in your corner for three hours every week.”

Loop Lab aside, the night ended with the feeling that every startup was a winner, armed with the tools they would need to build their business and a sense of camaraderie that would help get them past the next hurdle. I found myself in a corner of Trinity Common talking with Holly Knowlman, #NextTO’s other co-organizer and a marketing lead at TWG, about the impact of such a program on the Toronto startup community.

“The flipside of having a well-developed startup ecosystem is that sometimes all of the programs, events, initiatives, pitch contests all end up kind of running together,” Knowlman said. “It feels like there’s an amorphous blob of stuff that happens, and not as much thinking around the why.

“The truth, though, is that every one of these pieces, from grassroots events to Facebook groups to VCs adding “fuel to the fire,” go into making Toronto a dope place to be an entrepreneur. The obvious benefit of #NextTO is seeing a number of highly promising companies go from good to great with the guidance of an amazing mentor roster. Being a part of that growth trajectory is inspiring in a way that literally never gets old.”

Knowlman confided that #NextTO would be her final initiative as TWG’s marketing lead; Alison Gibbins, a mentor for the program, would be taking over TWG’s role with #NextTO moving forward. Knowlman was jumping off to launch her own entrepreneurial venture.

She, like many others at #NextTO, had caught the bug.