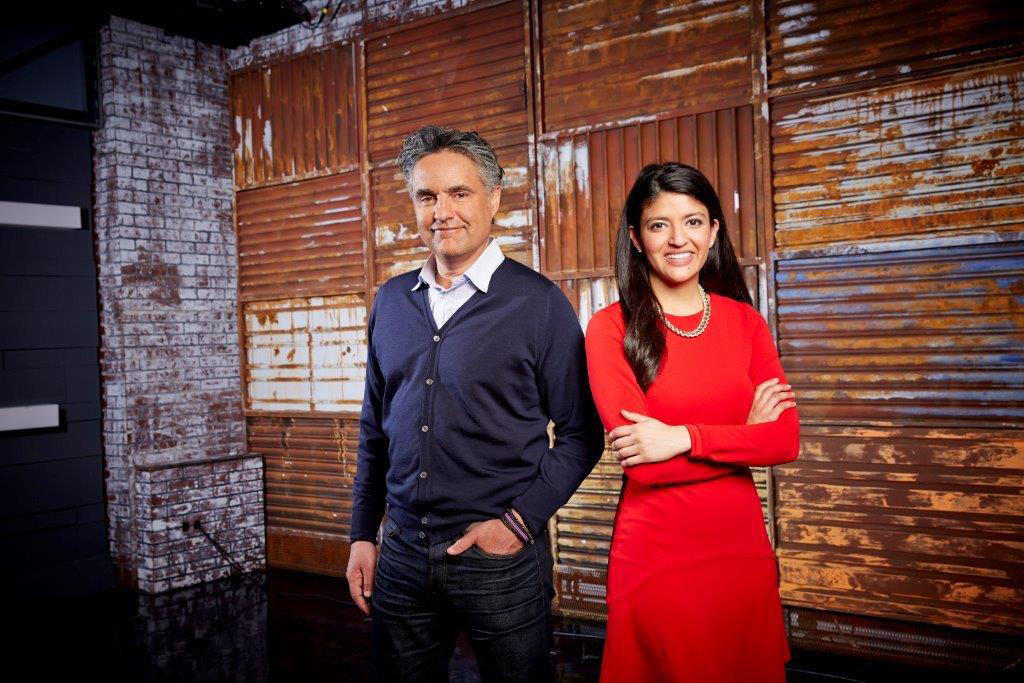 Bruce Croxon is coming back to television, just over one year after his departure from Dragons’ Den. Airing Thursday nights on BNN at 5:30pm starting April 16th, The Disruptors will feature Croxon and BNN’s Amber Kanwar speaking to the entrepreneurs and CEOs altering Canada’s digital landscape. BetaKit is also a partner in the show’s production, so you may see us popping on your TV screen from time to time, as well as clips from The Disruptors appearing on the site.

We sat down with Bruce to talk disruption, the Canadian and global tech landscape, and what would excite him enough to take time away from Round 13 Capital to jump in front of the camera once more.

Let’s talk a bit about the focus of The Disruptors. Obviously, your past TV experience proves that there’s a lot of ways to talk about startups in Canada. Can you talk about why the idea of disruption specifically seemed like an ideal entry point?

I really do think that the next ten years are going to be an incredible time for technology, and anybody involved in it. I think that Canadian entrepreneurs and Canadian companies can hold their own with anybody in the world, and I believe that we’ve been under-supported financially, and until recently mentor-wise. I think that’s a big hole that needs to be filled.

“It’s not just a show about the disruptor, but it is a show about being disrupted, and I find them both equally interesting.”

I think there’s an old guard of technology companies that’s slowly waking up to the fact that there’s change afoot, starting right within our own home court. There are a lot of companies used to making lots of money and having it their own way, both inside tech and outside tech, that are in the process of being assaulted from all sides. I would include the banking system in that, big established companies like IBM, Cisco – they’re all in the same boat.

From a consumer side, it’s never been a better time to be a consumer. There’s no excuse for overpaying for anything, the sharing economy is in full swing – to me, technology is a big reason why inflation is next to zero, because it’s taking so much cost out of the system – and the amount of data being produced is the second big revolution in our lifetime. So to me, everywhere you look, change is afoot, and I think that the companies that will make the most impact, either financially or socially, are going to be those ones that focus on disrupting the established order. It’s tough to have a conversation about any industry vertical today without the impact technology is having entering that conversation.

So this is not only disruption by technology, but disruption of that old guard of technology companies as well.

Exactly. I mean, IBM has had 12 or 13 consecutive quarters of revenue decline. Now, you don’t talk about companies being in trouble that have billions on the balance sheet – and they’ve certainly had a history of surviving change, more so than many – but they need to change. And they know it.

Change is sort of the inescapable word. It starts to have an impact on everything a company does, you start looking to hire people that are comfortable with that inevitability – you change your whole company culture to be one to adapt. To me, that’s a whole new way of thinking from one when you owned the market.

And another..this guy and company is all about #disruption. Show launching april 16. Deets to follow pic.twitter.com/f6LAKWyHlo

To your point of IBM, I was recently at its major conference and the whole narrative was one of ‘a new way to work’ and essentially adopting the language of startups and applying it to their traditional corporate approach. So how much of that will be a balance of the new companies coming up and creating that disruption, and the established old guard responding to that disruption?

We’re in the second biggest revolutionary time, certainly of my entrepreneurial career. The first, obviously, was the Internet and how impactful the old ‘information superhighway’ was to everybody, and now, to me, it’s the incredible amount of data that is being generated. A lot of it is not useful, but we’re increasingly developing the tools and the know-how to separate useful data from not useful data, and to me, it’s the second big sea change in our time, and the opportunities coming from that are phenomenal.

So the show is really focused on the businesses and services that are making use of that to disrupt the old guard. And an audience like BNN, and frankly a good chunk of people that have been in business for thirty plus years, I don’t believe are fully aware of the magnitude of change coming down the pipe. BNN is a good platform to keep up with what impacts public market valuations, which at the end of the day, all of the changes that we’re talking about will have an impact on company values moving forward. So it’s not just a show about the disruptor, but it is a show about being disrupted, and I find them both equally interesting.

So do you think that Canadian business is not fully aware of what the Canadian tech scene is doing, and vice versa?

I don’t think that they’re fully aware, and I don’t think that they’re fully aware because we have a history of selling a lot of companies really early here. That may be about to change – we have a couple of IPOs that are potentially ready to pop, which will potentially help people become more aware – but historically, at least since the last crash, the institutional and corporate market has been out at this stage of investing. As a result, companies that have needed capital, that have shown promise, have not gotten it, so we’ve ended up selling a lot of companies early before they make the so-called radar. I think the fallout from that is that traditional mainstream business is unaware of the change going on right now.

Back to this subject of Canada being underrepresented. I noticed that you had recently travelled to my hometown of Sault Ste. Marie to speak, and you’ve spoken a few times at events around Toronto that we’ve covered.

With Dragons’ Den, it’s very much a passive, ‘come to me’ kind of role, and it seems like you’re adopting this opportunity to be an evangelist for what’s happening in Canada across the country.

Dragons’ Den was an incredibly popular show, more so than I ever realized when I said yes to going on it. I had never seen the show before I was asked to be on it, and I haven’t seen it since I’ve come off, just because of my TV viewing habits, but I’m in a minority for that. Because of that, as much as my experience in entrepreneurship, people know about me, so I get invited to do a lot of this stuff.

The stuff that I tend to get interested in are things that involve entrepreneurship and young people because they have this incredible spirit. There’s a lot of this talk about an innovation crisis, I don’t think we have an innovation crisis whatsoever. We’re under-supported capital-wise compared to our neighbours to the south, but from an innovation, ideas, willingness to work hard, grit, determination standpoint, I think we can hold our own with anyone in the world.

So when I go out to do these talks, a lot of which are aimed at early-staged entrepreneurs, I get as much out of it as they do, because I see the spirit that I’m committing my time and capital to over the next decade. It’s good to see it firsthand.

You recently talked about your entrepreneurial path at Brightworks Innovation Day. Is there anything you’re taking from your history as an entrepreneur and applying it to evaluating the companies on the show?

I would say a few things. I’m a self-trained direct marketer, so I’m looking for companies that understand the difference between having an idea and having an idea that people really need. Companies that can demonstrate user and customer interest, that understand the cost of getting that customer interest, and have developed an idea on what that customer is worth, they’re well on their way to developing a real company.

I’d like to focus on the companies that actually have a chance to disrupt, to actually execute on the grand idea that they’ve envisioned. Because it’s a lot easier to talk about great ideas, from experience, than it is to actually execute on it. And that speaks to the team that’s actually going at it. It’s not easy, as you know, at this stage. More today than ever before it’s a 7 day a week, 24 hour obsession, because of how quick things are moving and how disruptive the disrupters can be to you as well. I’m most interested in guys that can go 13 rounds and still get off the stool, because that’s what it’s going to take.

Kitchener-based North, the company behind smart glasses Focals, has acquired the patents and technology of augmented reality (AR) Intel Vaunt glasses, according to a…