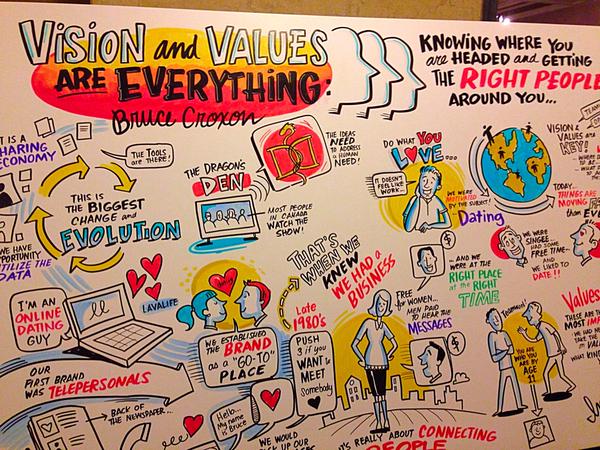 The 1980’s were transformative years for technology. This generation brought forth the Sony Walkman, Nintendo NES, Epson ET-10 Pocket TV, The Clapper, Casio C-80 Calculator Watch, and also saw the introduction of voicemail. Many of these products or services had a profound impact on everyday culture, but for Bruce Coxon, it was voicemail that proved to have a pivotal impact on his business.

Croxon, along with his business partners, developed Teleclassifieds, a phone-based classified service that included personals, pets, furniture and apartments. In 1988, the company transformed into Telepersonals and expanded to offer a phone-based personals service that allowed singles to meet and talk via phone. The rise of the internet forced Croxon & co. once again to pivot and create Webpersonals in 1999, which again gave access to singles to search and find a mate online. Webpersonals eventually became LavaLife in 2001, and dominated the online dating space for years. Lavalife sold in 2010 for $180 million, demonstrating that Croxon’s success was not overnight but instead accomplished by continually anticipating and navigating future trends.

Today at the Brightworks Innovation Day in Toronto, Croxon spoke about vision, values and innovation. “Today, more than ever, we are at a point where business is moving faster than before… pick something you love that doesn’t feel like work and do it. If you don’t, your competition will and they’ll beat you,” said Croxon.

It’s easy for startups to stay in heads-down building mode, but Croxon recommended the “simple element of planning” at off-site events. “There is a difference in performance in companies that take the time to remind themselves of the 3-year vision and what are the goals we need to achieve this year… reward people for getting there and do it again next year, but check-in throughout the year and I guarantee you the impact will be profound.”

“49% of the time things aren’t going your way. Everyone is great when things are great, but how are you when the wheels are falling off?”

Croxon also argued for teamwork as one of the fundamental values for a company, stating that teamwork was how Lavalife survived year-over-year growth (at its peak, Lavalife employed 600 people). “The more people in on a decision make for a better decision,” said Croxon. “With business moving so fast and competition nipping at your heals, get everyone’s agreement and be open-minded about the company strategy.”

But Croxon was willing to admit that businesses large and small have peaks and valleys. “49% of the time things aren’t going your way,” says Croxon. “Everyone is great when things are great, but how are you when the wheels are falling off? Are you someone who can still work as part of a team? What kind of person are you? Are you still a good partner a home? Are you still a good father, mom?” Croxon made clear to the audience that how you respond to the circumstances that arise on a daily basis will define the long-term success of your company.

Croxon, who also founded venture capital firm dedicated digital start-ups called Round13 Capital, was also honest about new struggles following past success. “I’ve never felt more like a hamster on a wheel than I feel now,” he said. “These are new times. New rules. You can consume content forever… you can literally never shut off. We are in the middle of a second period that is not as profound as the first internet wave, but not far behind. How we consume information, and how in turn the information is curated, I think is going to be one of the most predominant things over the next 5-years.”