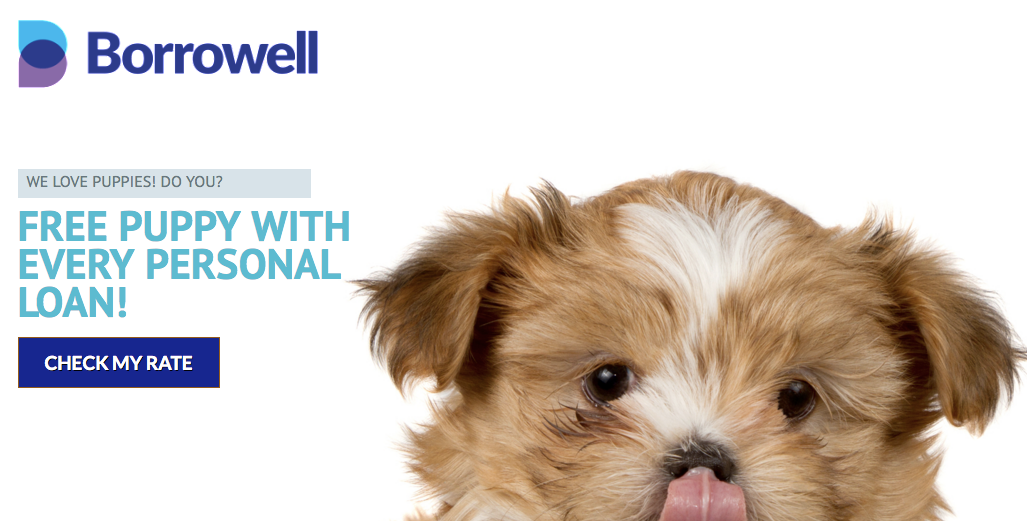 It’s April 1st, which means that many startups have engaged in the time-honored tradition of April Fools’ jokes to make their companies seem fun and engaging to potential customers, and hopefully get included in roundups like this one from our sister-site MobileSyrup. The potential upside is attention and the downside is the Internet gets inundated for a day with lame jokes.

It appears as though there may have been a few unintended consequences for Toronto-based FinTech startup Borrowell.

The lending platform had set up a landing page and sent out tweets today advertising a free puppy with every new personal loan approved. A pretty obvious April Fools’ Day joke, but Borrowell also notes on the page that it “will make a donation to the Toronto Humane Society on behalf of our customers who take a loan this week,” which is a nice touch.

Borrowell is proud to announce that our loans will now come with a little something extra!https://t.co/CwEczxsxVo pic.twitter.com/nHArqBP1xr

However, several sources have told BetaKit that Borrowell may have taken the joke a little too far.

However, several sources have told BetaKit that Borrowell may have taken the joke a little too far.

It appears as though Borrowell partnered with Uber and its Uber Puppies program to surprise a few new Borrowell applicants with furry bundles of joy at their homes for an hour as a thank you. Apparently, some applicants weren’t quite in on the joke, and have been trying to keep the puppies.

According to one of our sources:

“It’s been a madhouse. People are getting upset when they see how cute the dogs are and find out they can’t keep them. The Uber drivers are pissed because they’re getting one-star ratings, so they’re leaving without the dogs. Borrowell is already short three French Bulldogs, two German Shepherds and a Goldendoodle. No Shih Tzu.”

BetaKit reached out to Borrowell and received a terse “no comment” followed by “It’s Borrow-ell, not Keep-well” from company CEO Andrew Graham, a noted Collie supporter.

BetaKit also received word from Bruce Croxon, founder of Round 13 Capital and co-host of BNN’s The Disruptors (disclosure: BetaKit is a production partner). Croxon has made positive comments about the company in the past, so Borrowell sent him a Lhasa Apso.

“It’s never been a better time to be a consumer or pet owner,” Croxon told BetaKit. “But I’ve said time and again that FinTech companies in Canada will struggle against the banks due to the cost of acquisition. Pet food is not cheap, man.”

Update: BetaKit has received a statement from Borrowell, which we’ve posted in full below.

“Borrowell offers Canada’s fastest and friendliest personal loans, and like all startups, we know how to pivot quickly. We’re proud to announce that to capitalize on the exploding pet loan market, we’ll soon be offering kittens with each Borrowell loan application. We expect a 100 percent return rate for each cat by end of day – people only like cats on the Internet.”