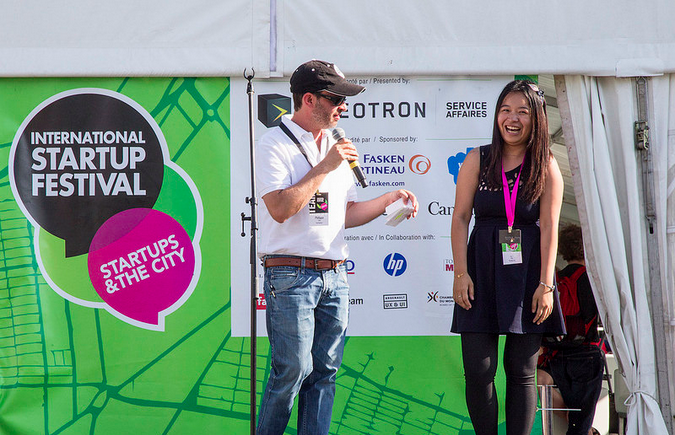 Our nation of Canadian entrepreneurs and investors are consistently vowing to improve, and find more ways to get early-stage money into the hands of entrepreneurs. We’re always trying to fund and incubate innovation for the end goal of more companies and ultimately a stronger economy.

Every once in a while we see a story that seems to affirm that the resources are in place. Today the trio of Next 36 entrepreneurs who created the Blynk app have released their iOS app, which gives the user their own personal fashion assistant via a swipe-right, swipe-left method. It filters outfits by preference, and after 20 swipes the app will curate a four-item outfit for the user, all of which the user can buy.

Susie Pan didn’t even plan on going to the festival, let alone winning her team a ton of money. She saw a contest on Twitter looking to give away a ticket to both the Startup Train, put on by Guelph’s ThreeFortyNine coworking space, as well as a ticket to the festival. She won that, which brought her to Montreal’s Old Port district for the big event.

At the event Pan joined a line that looked big, simply because people were congregating. That was the line to pitch the judges who would be compiling a short-list of pitchers to go on stage later that night for the big competition. Pan evidently did well enough and received a call a few hours later telling her she’d been short-listed.

After that the rest is history, and $100,000 is in the hands of a trio of university students who all met at the Next 36 accelerator in Toronto.

As for the winning pitch, Pan attributed it to the simplicity of the app and her ability to show the live product to the judges. The fact that 4,500 users had joined in one month to swipe over 1.2 million photos of clothing also went over well. “It was very simple to understand, it can be pitched in one sentence and the judges got it and saw the potential in it,” Pan told BetaKit.

Blynk was cofounded by CEO Jaclyn Ling, 23, a McGill University student, and CTO Shums Kassam, 21, from University of Toronto. Pan joined on shortly after in April.

Ling comes from a fashion background, having run a successful fashion YouTube channel with about 10,000 followers. The story goes that Ling took Kassam out for a day of shopping, which resulted in a lot of compliments about his newfound sense of fashion. Why couldn’t they provide a personal fashion assistant, like Ling, for everyone? Not only that, but they wanted to bring the idea to mobile.

A couple days ago at the Next 36’s Venture Preview Night, where startups from the program pitch to a crowd of investors and media, Blynk ended up gaining the most “investment money” in the form of fake currency that each audience member gets to disperse. It must have been a good sign.

Now the trio have released their iOS app after having relied mostly on an Android app. Blynk earns a commission off of each purchase, as users can buy any of the items that the app curates for them when the app redirects them to the retailers online store.

Pan said they have a number of ideas for increased monetization, including incorporating advertisements without disrupting the user’s experience. They’re also in talks with a major clothing retailer in Canada about possibly even bridging the online and offline shopping experience. They’d do it by installing iPads in the stores where shoppers can actually swipe left and right on the Blynk app, with products that are available a rack away.

They’ve got the ideas, the newly found money and now the app on both major platforms. It looks like this young startup is up to something.

Today San Francisco-based Udemy, an online education marketplace, announced that it closed a $12 million Series B round led by Insight Venture Partners, with additional…