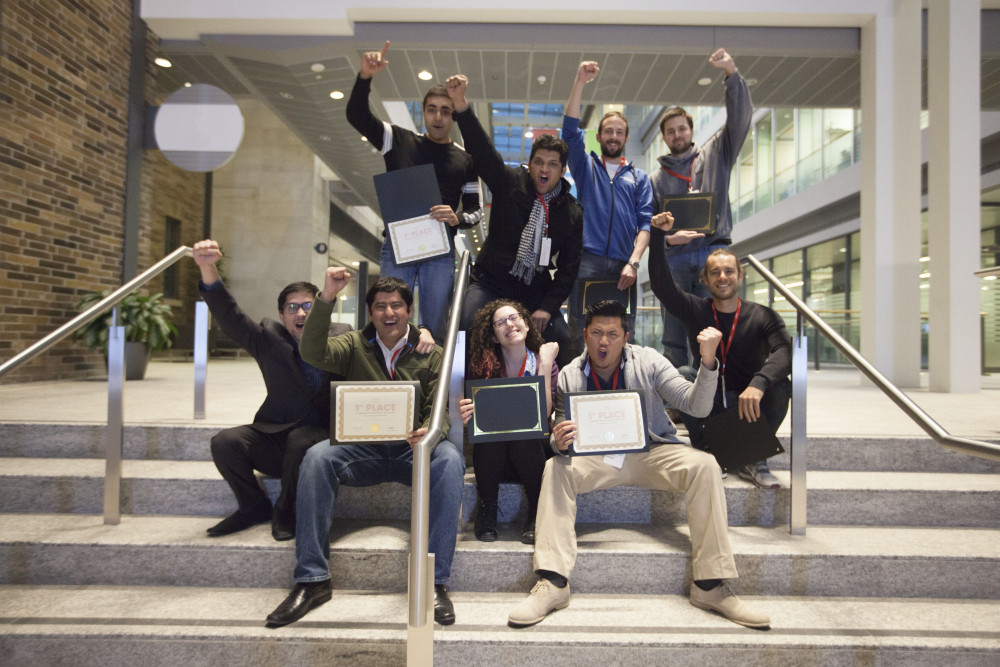 BetaKit has a soft spot for hardware.


Our team-wide dream of building a robotic copy editor, or pizza delivering blimp, has created an insufferable itch to play with new kit whenever we can.

It’s fortunate, then, that Toronto’s maker movement is currently exploding. In addition to the Mini Maker Faire, our fair city has now experienced its first Hardware Hackathon, a joint collaboration between MaRS and custom design manufacturing company PCH International.

As I’ve said before, you can’t throw a stick without hitting a hackathon in Toronto nowadays. But hardware hackathons are new to our fair city, and #HackTO’s inaugural event brought an air of freshness with it.

The event kicked off with a BetaKit-led panel (BetaKit was #HackTO’s official media sponsor), where our esteemed editorial team (and, somehow, me) discussed the latest hardware trends. But when the conversation opened to the audience, who asked in various ways our opinion on what to build, we quickly turned the tables. BetaKit wasn’t there to teach; we were there to learn. If you could spend a weekend building anything, what would it be?

Authoritative speakers aside (the event also featured a panel with the founders of Nymi, Ringly, Ecobee, and ShopLocket, as well as a Q/A with 3D Robotics’ Chris Anderson), the real character of #HackTO came through when the assembled hacktivists lined up to pitch their weekend projects. Grizzled engineers stood beside members of the Toronto tech community, DJs from Montreal, and a young brother-sister duo (in Grade 2 and kindergarten, respectively) to share their ideas on the most awesome thing that could be built in a weekend. The pitches, from shoes that charged your phone while you walk, to anti-drone cannons, were as varied as the participants.

The friendly energy of Friday night quickly shifted to productive gumption once the projects were selected and hackers started hacking. Our Tom Emrich participated throughout the weekend as a mentor, and was thoroughly impressed by the tenacity and focus of the hacktivists.

“Creating something in a weekend is no small feat,” he said. “In talking to the teams this weekend I was impressed by how focused they all were on the problems they were solving. From keeping seniors safe to making parenting easier, most of the teams resisted the urge to create something just because they could and instead channelled their energies this weekend to use technology to make the world a smarter and better place. I wouldn’t be surprised if some of the teams went on to further evolve their products after the hack.”

Day two at the @PCHHackathon and the teams are busy making! So honored to be here as a mentor #HackTO pic.twitter.com/tBoJoH1JHB

Only three teams, however, could be selected as winners during the Sunday judging. First prize went to Enlightli, who had developed and prototyped a helmet with body heat-powered LED lights to help keep cyclists safe, netting them $8000 in prize money plus additional in-kind services. Second place went to Alfred, who had developed a smart cane attachment to track health and activity data, notifying loved ones if the person should fall.

But it was the third place team that underscored the growing Toronto maker movement. Galactic Bot had developed a device to measure the brightness, temperature, and composition of stars. The team was comprised in part by the young brother-sister duo that had won over the crowd Friday night.

I’m not sure if I had the technical wizardry in Grade 2 to build much of anything electronic, but I’m sure I didn’t have the opportunity to try. The maker movement is less about today and more about tomorrow; the future shines bright.