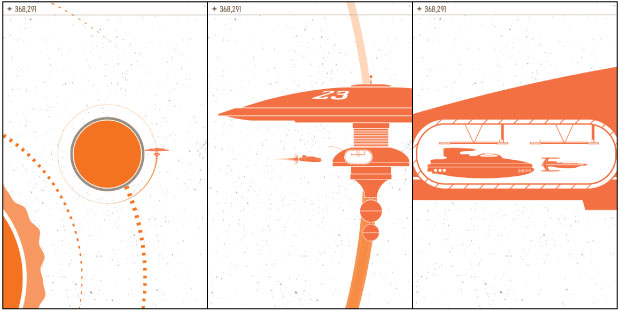 Millions of Gen-Y’s have likely played one of the many Grand Theft Auto games, which alternately offer the gamer scenes of extreme violence and reckless driving amid mass police chases. My parents actually banned the game from our house but my brother and I continued to game it on the down-low…rebels, I know.

The proliferation and saturation of in-your-face, violent and sexually-charged video games over the past decade was partly the motivation behind Toronto-based Blitztream Games and its new iOS game (and series as a whole), Third Epoch. The first game they’ve developed for the series is called “Rising,” and offers gamers a minimalist graphic style, inspired by 80’s sci-fi.

For Blitztream cofounder Adam Oliveira, the father of three young children, he wanted to build a game “that’s cool, kind of sophisticated but also not violent and dark.”

“They’ve been playing on my iPad since they were two and they’re starting to graduate to more sophisticated games. I was thinking about games that would be suitable for them, and remembering the games that I grew up on, and I thought there’s nothing out there,” Oliveira told BetaKit. “I want to create a gaming company with soul, I want to create games that make people imagine better things for the future and imagine that there are other ways to resolve your conflicts and problems without resorting to violence.”

Oliveira held high-level creative director positions at several well-known Canadian gaming studios for about 20 years. He was working for an agency he had helped build up to a $2 million company, but finally through in the towel when execs made it clear they wanted to stick to marketing, rather than producing a title. Off went Oliveira and today the team eyes a release date for Third Epoch: Rising, likely at Christmas.

According to Blitztream, Third Epoch: Rising is an epic sci-fi game of spaceships, discovery and adventure. Travel the stars, trade and earn resources, build fleets of ships, and take on missions to chart new phenomena and save planets. The issues that gamers face in Rising including civil rights, environmental and economic sustainability and overcoming barriers to progress.

On the design of the game, Blitztream’s James Rae said there’s a lot of scale and depth despite the minimalist look, but its fundamentally built around three familiar concepts: trading goods, travelling space and tactical supremacy.

Oliveira said the design was motivated by the “discipline graphic aesthetic of the 70’s and 80’s: “It was a process of using this to bring to life drawings of spaceships we all did when we were kids, and turning them into the game we always wanted to play.”

He calls the style an “orange, vector-based minimalist style graphic approach that’s completely different from most of the games you see out there.” At two recent gaming conferences, Gamescom in Cologne, Germany and the Montreal International Games SUmmit (MIGS), Oliveira said Rising consistently received “amazing feedback” to its unique minimalist style.

The cofounder also told us that in future games Blitztream will actually start rolling out devices that augment the game-playing, such as 3D printing. Players can buy files for some of the toys that they want to create from the fictional universe, print them out and use them within the game play.

Ultimately though, it all comes back to this concept of building a game to facilitate positive development, particularly among younger gamers. Oliveira was motivated by a TED talk by Jane McGonigal, entitled “Gaming can make a better world.”

“There’s enourmous potential for games to influence how we envision and consequently create the future,” said Oliveira.