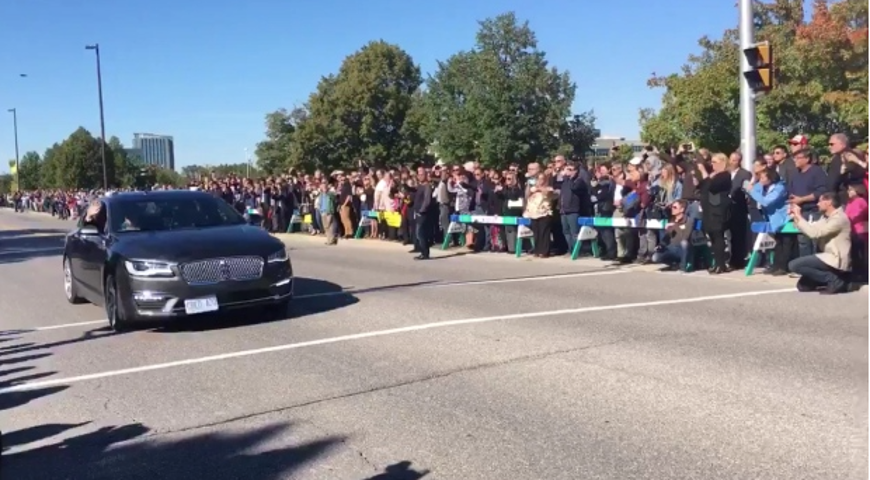 This demonstration is said to be the first public autonomous vehicle (AV) test in Canada. The partnership with BlackBerry QNX, who opened an AV innovation centre in Ottawa last year, gave the province the facilities and technology to advance their vision of becoming a hub for developments in AV.

“Ottawa has established itself as an innovative and smart city, is home to a diverse technology hub, and has the expertise, new technology and talent needed to spark autonomous vehicle innovation,” said said Jim Watson, mayor of Ottawa. “With support from BlackBerry QNX and its Autonomous Vehicle Innovation Center and by working closely with all our partners, we are facilitating smart initiatives and research, and fueling innovation and job creation in Ottawa.”

The streets were closed in the Kanata North Technology Park as the grey Lincoln MKZ took off for this milestone test with Watson, councillors Marianne Wilkinson and John Wall, and general manager of BlackBerry QNX onboard.

The test area surrounding the technology park was equipped with transmitters on traffic lights that communicate with the car, LED street lights, and repainted street lines. The ultimate goal is that the AV will be able to operate with traffic and pedestrians on city streets.

With this public demonstration and over 70 companies in its autonomous vehicle ecosystem, Ottawa is working to be a leader in AC technology in Canada. The next phase of development will include contributions from Nokia, specifically the addition of LTE and 5G capability to the route.

Another public driving test area has been announced for Stratford, Ontario, as part ofOntario’s plan to invest $80 million over five years to create an Autonomous Vehicle Innovation Network.

“Thanks to the city of Ottawa, our AVIC was able to help establish a functional, real-life test route for our autonomous vehicle concept car, which will benefit our growing ecosystem of customers, partners and developers,” said John Wall, general manager of Blackberry QNX. “Anybody who has driven in Ottawa in February knows that no matter who is behind the wheel, driving isn’t easy when it comes to ice, sleet and snow. We believe these conditions coupled with the City’s commitment to supporting research and development from BlackBerry and its partners, makes Ottawa a fantastic place to advance autonomous vehicle technology.”

This growing interest in AV is wide-spread in North America, with auto parts firm Magna International . announcing that it will be developing a self-driving system by 2021 in Canada, and Uber and Google’s parent company, Waymo, testing self-driving cars on city streets in the United States.

While automotive and tech companies race to develop self-driving cars, BlackBerry QNX is focused on designing the infrastructure of this new technology and figuring out how the signals come in. Another public driving test area has been announced for Stratford, Ontario, as part of Ontario’s plan to invest $80 million over five years to create an Autonomous Vehicle Innovation Network.

“Ottawa is a global leader in autonomous vehicles and related technologies, leveraging decades of innovation and industry leadership in information and communications technologies (ICT), next-generation networks, wireless, and related hardware and software. Our region has the expertise and capabilities required to develop, commercialize, and adopt new vehicle-to-vehicle (V2V) and vehicle-to-infrastructure (V2I) solutions,” said Michael Tremblay, CEO of Invest Ottawa and Bayview Yards. “These technologies can be integrated into global supply chains and sold around the world.  This new testbed adds critical capability to our ecosystem, enabling innovators to test and commercialize these AV technologies.”

Silofit is a Montreal based startup that has created a network of private, on-demand fitness spaces through an app offering that allows users to…