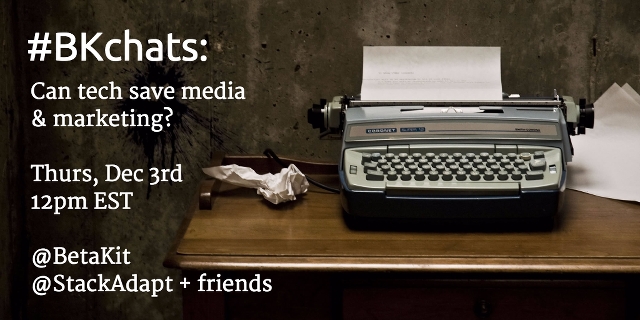 Toronto-based StackAdapt recently released a new infographic that shows how the changing world of media continues to… well, change. In a study of over 1,500 advertising campaigns on 30,000 publisher sites, StackAdapt has found a possible solution to content consumers suffering from ‘banner blindness’, noting that native ads receive 85-93% more click-throughs than traditional display ads.

But when a 93% increase means a 0.8 CTR rather than 0.06, maybe there’s more to worry about than the ad block apocalypse. In an increasingly competitive attention economy, how can brands stand out from the crowd? How do media publications monetize great content without sacrificing editorial credibility? What role will technology startups play?

BetaKit and StackAdapt have teamed up with a select group of influencers and thought leaders to answer these questions. Join us this Thursday on Twitter for #BKchats!

@BetaKit
@StackAdapt – Vitaly Pecherskiy, co-founder and COO at StackAdapt (who will be Periscoping the chat as well!)

Startups often struggle to tell their story. Who are they? What is their purpose? How are they changing the way people interact with the…