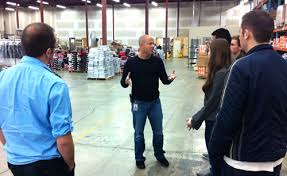 About six months ago I took the bus out to the St. Laurent neighbourhood of Montreal to interview Beyond The Rack CEO Yona Shtern. He told me something I didn’t forget: “I have five kids and I have a lot of responsibility. And it’s an amazingly strong motivating factor.”

Today that motivation factor may have grown larger, as the flash-sale fashion eretailer took on an additional $25 million in venture capital funding. This round is Beyond The Rack’s sixth funding round, and the company received contributions from three new investors, Investissement Québec, Iris Capital and Tandem Expansion Fund. Meanwhile, past investors also participated, including Highland Capital Partners, Panorama Capital, BDC Venture Capital IT Fund and iNovia Capital. The news was originally reported by Women’s Wear Daily.

It’s likely just another day at the office as far as Shtern is concerned though. Now the company has raised $70 million in venture funding.

Shtern told WWD that that the company is on track to surpass $100 million in sales for the year and, will be profitable for 2013. “A company like ours, with plans to become a multibillion-dollar firm, needs capital to grow,” he said. “We’ve acquired three different e-commerce companies and we paid back the cost of acquiring one of them in less than four months. We’re converting members — about 10 million at last count — into buyers. Investors find our profile compelling.”

The other big news was the hiring of former Amazon.com executive Mike Bhaskaran, as its COO.

“As a global investor we have broad exposure to e-commerce internationally and have been impressed by Beyond the Rack’s world-class unit level economics and operations,” Iris Capital’s Alexander Wiedmer. “It is ideally positioned to be an industry and market leader as e-commerce continues to expand in both Canada and the United States.”

“Two years ago, mobile accounted for about 6 percent of our business, and today it’s close to 50 percent, and on a Saturday or Sunday night, when there are a lot of women shopping on iPads, it can be 80 percent,” Shtern told the magazine.

PwC Canada has opened up applications for its 2018 Vision to Reality Awards. The V2R Awards celebrate Canadian entrepreneurs at all stages of building…