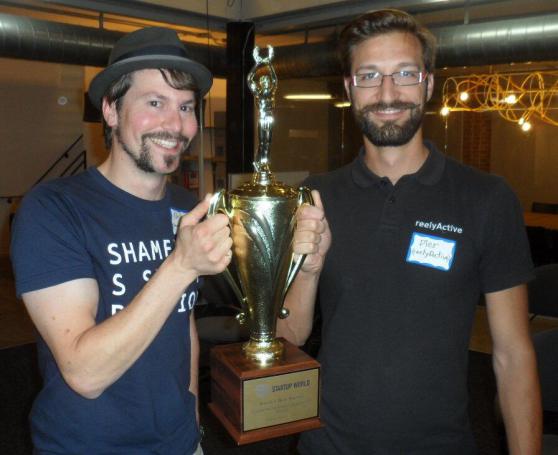 One of the more unfortunate realities about the tech startup world is that there’s an unhealthy amount of celebrating nothing, propping up businesses that are doomed to fail and otherwise talking about people and companies simply because someone else is tweeting about them. PR-fuelled content and tech blogs everywhere unfortunately play a role in this system.

In fact, just last week when I took part in a panel discussion at Toronto’s Project: RHINO called “All Bullshit Aside,” the conversation turned to “playing the system.” Angel investor and 5by founder Greg Isenberg and MaRS senior advisor Aron Solomon took opposite sides in the debate about how one can go about achieving success in the community, for their startup.

Isenberg, the young, savvy 24-year-old entrepreneur who has already exited several companies, said one must put themselves out there, rub shoulders with the right people and forge connections to get known. Tech startups, argued Isenberg, has always been an old boys club, so infiltrate and play their game. Solomon accused Isenberg of “living in post-apocalyptic times infused with ‘The Fountainhead,” referencing the 1954 novel by Ayn Rand.

He said we shouldn’t be encouraging those values. If so, power will never reward those with actual merit and intellectual power, but rather a “worse old boys network than ever, coupled with tons of people that don’t believe there should be anything stopping them from doing whatever the hell they want no matter what the rules or regulations say.”

Solomon’s words were encouraging, even honourable. But in today’s world, maybe utopian.

On the other hand, there are many entrepreneurs who have “made it” by going it alone, building a great product and continuous hard work. I like to think of Quebec City-based Kangaride as one company like this, who’s two cofounders spent at multiple years working out of their parents basement, and then their own apartment, never calling anyone for funding until they starting making profit. After three years they finally did go cash-flow positive, and last year they wowed investors on the CBC show Dragons’ Den.

Nevertheless, hype helps any startup. It’s the truth and not too many people are willing to admit it, possibly due to pride.

One startup that has recently played gracious host to the amusing phenomenon of “hype” fully understands the way this system works. reelyActive‘s CEO Jeff Dungen has always been an honest person and he had no problem talking with BetaKit about the subject of the “hype bandwagon”.

“Its one of the ironies of the startup world where it doesn’t matter if you were doing the right thing at the right time at the right place, at the end of the day it seems that people really want to get behind something that other people are behind,” said Dungen. “I’m sure you can make the analogy in high school or social circles or something where there’s just a natural human safeguard, that people want to be with whoever’s cool.”

reelyActive was founded two years ago and immediately had a B2B customer for their Internet-of-things (IOT) solution. It’s a cloud-based startup that connects the physical and digital worlds using “reelceivers”, or little keychain-sized location devices. Physical locations who set up these reelceivers can display on screens who’s present and how they’re interacting, using social media like Twitter and LinkedIn. Brick and Mortar locations can implement them to study the behaviour of their shoppers. The reel can simultaneously support protocols such as Bluetooth Low Energy, supported by the latest smartphones, wearables, and tracking device.

The company went through Montreal’s FounderFuel accelerator program. By that time the B2B customer that was paying the bills had gone another route and reelyActive wanted to test the waters via an accelerator, in the pursuit of another strong partner. They were too early for seed investment and the IOT wasn’t nearly as known as it is today (and today it still has a ways to go before being a household term). FounderFuel landed them recognition along with a few frustrating days. They went back to courting B2B customers, which came with long and difficult sales cycles.

“Then we flipped back to, ok, lets make sure people can see what we’re doing,” said Dungen. They featured their technology via monitors all over the International Startup Festival this summer, a smart move that landed them a gig at the local Montreal startup world competition (which they won). Then three weeks ago the company won the global Startup World competition in San Francisco, being crowned “best startup in the world” . The competition has taken place in 20 cities globally over the past two years with the aim to connect Silicon Valley culture with the world and the world with Silicon Valley.

Meanwhile, Dungen’s cofounder Pier-Oliver Genest travelled to Beijing and Sydney to defend a scientific journal article the pair published on their technology, “another thing that we did completely different, lets do science and make people love us for that,” said Dungen.

The Startup World victory brought them a big shiny trophy, coverage in both VentureBeat, the Financial Post and Startup Canada’s magazine, and a bunch more people who know what they’re actually doing.

“Nobody really checked to see if our technology was good or if what we’re doing works, and it could be complete vapourware. It isn’t and that’s why we feel good about what we’ve done,” joked Dungen. “My advice for anyone who has a startup is anything, any marketing cow that comes up to you, you should milk it. That milk is worth more than anything.”

With a bit of publicity behind them now (and no shame in admitting that it’s helping their company), reelyActive is strongly focusing on retail solutions, as it worked out well for them recently when Dungen pitched a Canadian Tire executive at an event last month. They’re in talks with “a local large partner” while looking for a partner that’s better connected in retail. “We provide them with our technology and they do the relations and the final aspects of it.”

All the recent buzz surrounding the company may have been unexpected, but Dungen just wants to run with it. The benefit his company has is that once others do realize what they’re trying to accomplish (“connecting the physical to the digital”), the buzz seems well deserved. And not, as it goes with so many empty startups living on talk and not merit, the other way around.