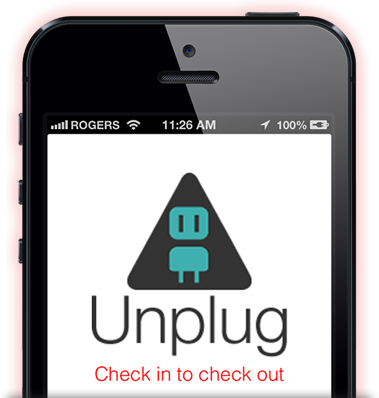 Social graces are going down the toilet in 2014 and we blame our devices. We blame social media and we blame ourselves. Should the blame game be played at all, or do we simply accept that sociability is subject to change?

There’s no shortage of opinion. Dr. Sue Johnson recently penned an article “How Gadgets Ruin Relationships and Corrupt Emotions.” The New York Times offered the commentary, “More Connected, Yet More Alone.” Lifting your head for a moment, you’ll see no shortage of others around you walking the street, sitting in the coffee shop, and riding transit with their heads down staring at a screen. It’s pervasive. There’s something wrong when social creatures aren’t really being social.

For Vancouver’s Devon Ash, declining social graces are beyond pervasive, and there’s a problem. In some ways it’s ironic, but he believes there’s an app for that.

Teaming up with Chad McFarlin’s Tribal Interactive team, they’ve launched Unplug. The app prompts you and your friends to turn off the phone.

It’s based on a Facebook check in, and allows you to select an amount of time to unplug. Tag a few friends too, with the idea that they’ll unplug. Note your location and even take one last photo to capture the moment, and then unplug to airplane mode.

It’s about being social, not being on social media. Ash thinks, “there’s no question that social media can be like a drug. Likes, comments, new followers, retweets, notifications popping up on the homescreen, make for that pleasurable momentary hit of dopamine. It’s a fleeting feel good moment. Yet, in a social situation when we get a smile, wink, nod of approval, or laugh from our comment, we get a much bigger, and more intense version of that same little hit.”

Ash isn’t anti-device or anti-technology, he just believes “we are losing touch with some of our most human experiences. For the past 8 years I’ve been on a mission to help more people connect with the real world (www.socialfluency.com and www.shucktheworld.com). I do it by training people in advanced social skills both offline and online but I realized there’s an important part missing, helping people with the addiction to their phones.”

He says “the digital intermediary is a buffer that makes us feel safer, but the real life experience of developing friendships and relationships is much more profound. It can be life changing. Whereas, re-pins, likes, and shares, aren’t going to have that effect. I’m really concerned with the impact this is having on kids. It’s all they’ve ever known. We have no idea what kind of impact this is going to have in terms of social interaction.”

Ash isn’t the only one with concerns, Louis C.K’s take on the situation is on the mark.

“Your device is OK, there’s no denying it’s here to stay, but it’s not going to make you happy. We need to manage how much we use it,” said C.K. “Device overuse will just become an addiction.The thought of future 12 step programs for device and social media addiction is unnerving.”

If you’re ready to put the device down and work on some social skills, Ash kindly shares his top five things to work on –

Ash is all about upping our collective social graces, saying “we have so many shallow friendships and so few deep relationships and it is the deep ones that make us truly happy. So when we are out with real people is when we need unplug and really invest in the friends we are with rather than wondering what everyone else is doing”

Being social can take work, practice and effort. Unplugging can only help. Device or not though, I have to wonder if the typical nerd or geek is inclined to be socially awkward anyway. After all, there were bookworms and AV club kids (like me) long before before the digital natives.

Kik answers questions about potential sale and IPO on #TheDisruptors

Another Thursday night, another episode of The Disruptors. This week’s episode was all about straight talk, as hosts Amber Kanwar and Bruce Croxon went…