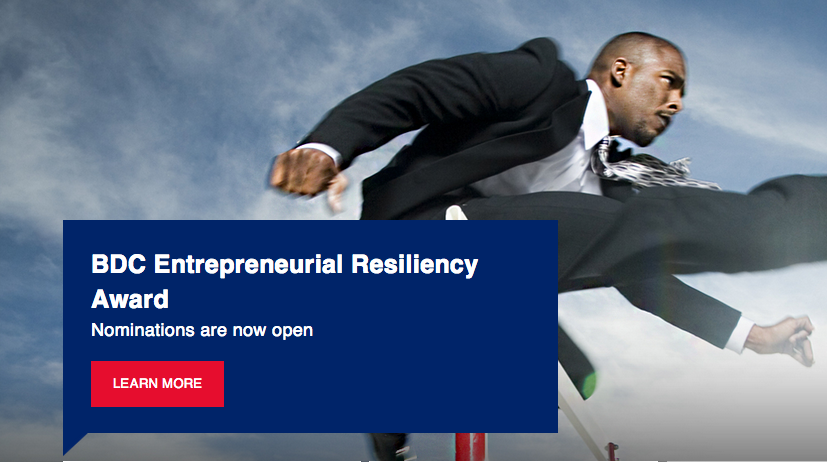 The Business Development Bank of Canada (BDC) is introducing another award for Canadian entrepreneurs.

Back in January the BDC said it would introduce four new awards for Canadian entrepreneurs, which were the Mentorship Award, the Innovation Award, the Resiliency Award and the Entrepreneurship Champion. The latter award will be announced in October, during the 2014 edition of BDC Small Business Week.

The Mentorship Award’s six regional finalists were announced last week, while the Innovation Award’s nomination period ended earlier this month. The winning start-up will be honoured at the 2014 CVCA Annual Conference in Ottawa from May 20-22, where they’ll meet with some of Canada’s most successful investors, entrepreneurs and business leaders.

Now the BDC is ready to push its “Resiliency Award,” which will recognize a Canadian business that has come back stronger after undergoing a turnaround or pivotal event in the past year. It’ being put on in partnership with the Turnaround Management Association, Montreal Chapter (TMA-Montreal). The winner receives “the opportunity to be recognized and profiled on a national scale.”

The BDC feels that most Canadian entrepreneurs can relate to failure, whether we like to admit it or not. In fact, according to a recent Industry Canada report, 80 percent of enterprises that entered the marketplace in 2008 survived for only one year. However, more than one-third (34 percent) of experienced entrepreneurs have gone on to successfully start another business after a failure, while nearly two-thirds (60 percent) have started between two and four other businesses.

“Entrepreneurs know that there is no shame in failure. In fact, we should all be inspired by their ability to turn mistakes into opportunities and ultimately find success,” said the Canadian Minister of State for small business and tourism Maxime Bernier. “Our government is empowering more entrepreneurs to distinguish themselves through their willingness to take risks and Canada’s Economic Action Plan puts the right conditions in place for their success.”

Nominations are open until June 20, 2014 and the winner will be announced in September 2014. “Resiliency is an essential skill for entrepreneurs. With this new award, we are aiming to recognize that failing is part of the entrepreneurial process,” said the BDC’s Michel Bergeron. “Being in business is a high risk venture and growing a business is never a linear process.  It is inevitable that entrepreneurs will face bumps in the road, some fatal.  The important element is to make sure that they can apply what they have learned.  This award is aimed at changing the mindset that having scars is a sign of weakness. In fact, it should be a sign of pride.”