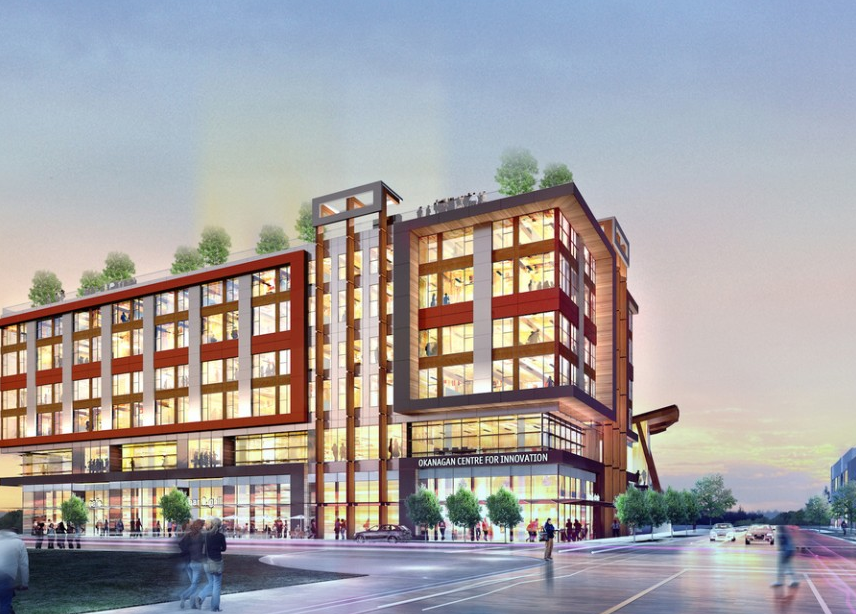 The government of British Columbia has invested $6 million towards a new innovation centre in Kelowna.

Premier Christy Clark and Minister of Technology, Innovation and Citizens’ Services Andrew Wilkinson were joined by local technology entrepreneurs and Mayor Walter Gray for the announcement on the new “Okanagan Centre for Innovation”.

“Becoming the next made-in-B.C. success story like HootSuite or Club Penguin is no easy task – that’s why we’re investing in this project to help give people in our tech industry a competitive advantage,” said Clark. “This new centre will help entrepreneurs get their companies up and running, and launch Kelowna not only as a national tech leader but a globally recognized destination for tech investment and entrepreneurial development.”

Construction of the six-storey, 9,850 square-metre (106,000 square- foot) centre, which will be located adjacent to the Okanagan Regional Library, is expected to begin in late summer and is anticipated to be completed in early 2016.

The innovative centre will provide work space for tech entrepreneurs, students and companies at a “minimal cost.”

The $35-million project is being funded largely by the Kelowna Sustainable Innovation Group, who will also own and operate the building. The project was created by a “diverse group of creative minds” including: community, civic and academic leaders including representatives from private industry, Okanagan College, University of British Columbia, Accelerate Okanagan and the Central Okanagan Economic Development Commission.

The City of Kelowna has agreed to a long-term lease of city-owned land valued at more than $2 million in the heart of downtown Kelowna to support economic growth and revitalization. The city will also receive ownership of a portion of the building that will be leased back to the Okanagan Centre for Innovation to provide non-profit space.

The Province will own a portion of the centre, which will be reserved specifically for local start-up tech companies at a minimal cost. The provincially owned space in this building will act as an in-between location for companies that have completed their participation in the Accelerate Okanagan Venture Acceleration Program and are still at a venture stage, relying on securing flexible space.