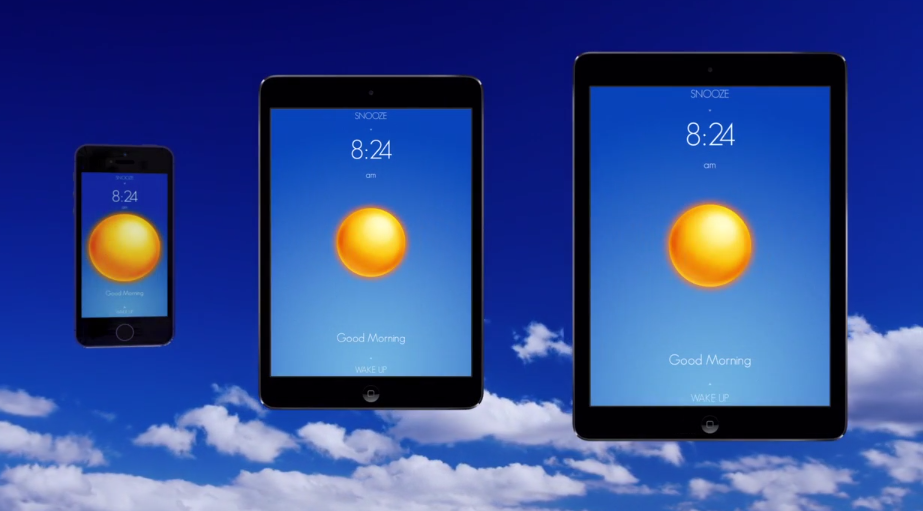 Robleh Jama and his team at Tiny Hearts in Toronto have released the 2.0 update to the wildly popular Wake alarm clock app. Users enjoyed the Wake app so much that at one point it was the #1 utility app in Canada and among the top 50 in the US App Store.

Wake originally struck users with its minimalist yet plainly appealing user interface, as well as three distinct alarm styles — Slap & Flip, Shake and Swipe. The Slap & Flip mode lets users snooze the alarm by, well, slapping the phone and it can be turned off by flipping the phone over. The Shake mode is for heavy sleepers who have to vigorously shake the phone to turn it off, while the Swipe mode involves swiping down on the screen to snooze and up to turn the alarm off.

The new update introduces “a whole new way to set your alarm” with the user’s voice, the ability to choose an alarm from an iTunes library, and a refreshed iOS 7 design.

“We’re pretty pleased and proud with how it turned out. It’s a pretty big update for us and we were scratching our heads about how we could outdo the first version,” said Jama. “I think we came up with something really cool with the voice feature, and the goal of the alarm was really to simplify that whole process of setting the alarm.”

The new update makes Wake available in both landscape and portrait (I’m a big landscape fan), and thus compatible with iPads for the first time. There’s also a brand new Help section and more alarm customization so users can control the Alarm Style for each alarm they set. Finally, users can wake up to their own music or by using a Siri-like voice feature by simply talking to the app.

On the minimal style that was such a hit with users, Jama said for that reason they didn’t change too much about the main page.

He also mentioned that over the past six months several copycat apps have came to his attention, like the Wake Alarm Clock Pro, the Woke Alarm and one in particular, the Neon Alarm Clock. To be fair to Jama, the latter app really does appear extremely similar, particularly in user interface.

“There’s a fine line between inspiration and improving the idea and copying it in that sense versus stealing when you’re not really doing anything different, just copying and pasting, and that’s the issue,” he said. “Some of these apps are clearly just knocking off and copying wake, especially the android version.”

But can Apple or Google do anything about this when it appears that it is a classic case of “ripping off”? Jama said its likely hard for them to police such activities when its happening so much, among the massive amount of different apps. He said contacting the copycats and issuing cease and desist letters are always possibly, but he doesn’t quite want to go that far.

Next up for Tiny Hearts is their new fitness app, which should be coming out in the next few weeks. Knowing the type of calibre of apps these guys put out, we’re looking forward to checking it out.