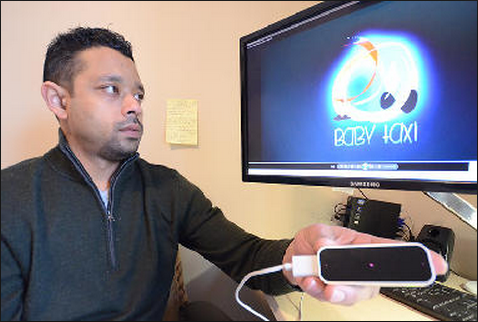 BabyTaxi CEO Tarik Sayeed has been named among the third round of speakers this morning for the upcoming TEDxToronto ideas conference, the event’s sixth annual instalment.

Sayeed’s fascination with gesture recognition technology led him to leave a successful career in IT to launch BabyTaxi, the company that builds software to translate American Sign Language into corresponding text and voice. Previously he held several leadership roles in companies such as JumpTV, Comcast and First West Credit Union. Tarik studied at NJIT, the University of Waterloo, and has a leadership certification fromMIT.

Baby Taxi was founded in Penticton, BC and also has an office in Bangladesh.

For many people in the world, not being able to communicate easily and quickly during everyday transactions is a frustrating reality. BabyTaxi said it wants to bridge that gap and help hearing and speech impaired North Americans and world citizens become more connected to the world around them.

“Our project is to use LEAP Motion technology to interpret American Sign Language into correspondent text and audio speech, which can be displayed or played using mobile devices such as laptops, smartphones, and tablets.” ​​​​​​​​​​​​

BabyTaxi’s prototype is now ready, a technology that will “gift a voice to the voiceless and will help them connect to their family, friends, and neighbours better than ever before.”

Given TEDxToronto’s tendency to choose speakers with more than just a tech startup, it should be interesting to hear the kind of compassionate tales Sayeed might entertain the crowd with.

Having built and sold two companies, Frontline Staff Inc. and the Momcafé Network Inc, Jill Earthy is paving the way for women entrepreneurs and…