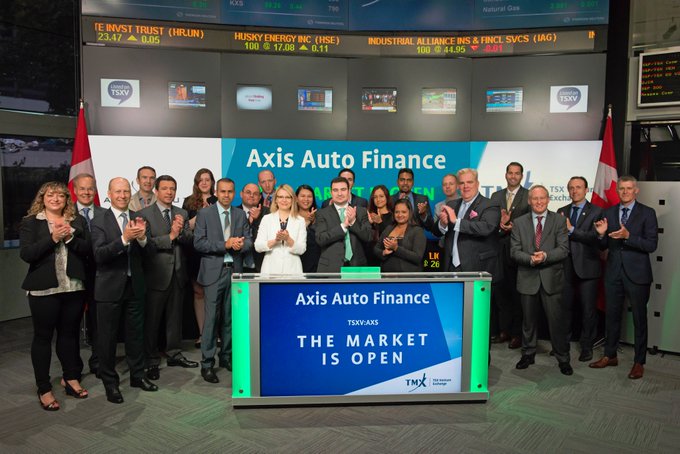 Axis Auto Finance Inc., a Mississauga-based lender that describes itself as a FinTech servicing the alternative auto finance market, is set to raise $15 million from NowLake Technology.

The TSXV-listed Axis is receiving the capital through a private placement offering where NowLake will purchase 30,000,000 common shares at $0.50 per share. Through the deal, NowLake will own approximately 23 percent of Axis’ issued and outstanding common shares post-closing.

“Our partnership has proven to be mutually beneficial, and we are excited to grow NowLake’s ownership stake in Axis.”

Axis plans to use the proceeds for the roll-out of digital loan origination channels, as well as “general corporate purposes.”

Founded in 2012, Axis provides subprime auto financing solutions to Canadians who do not qualify for traditional auto financing. The company claims to provide those loans to around 30 percent of Canadians that have credit scores in the non-prime range. The startup joined the TSXV in 2016.

NowLake is the FinTech company of United States-based companies Nowcom and Westlake Services, which created NowLake earlier this year.

“The completion of this merger is part of our larger goal to expand our opportunities in automotive and other fintech spaces like point of sale, medical, secured, and personal loan financing,” said group president of Westlake Technology Holdings Ian Anderson when NowLake was created. Anderson has since taken on the role of president of NowLake.

As part of the $15 million investment, Axis and NowLake came to an agreement to expand Axis’ board of directors to eight members. It is anticipated that Andreson will be appointed to the board. The investment agreement also provides NowLake with “pre-emptive rights” in respect of future equity offerings of Axis as well as registration rights (a right entitling an investor who owns restricted stock to require that a company list the shares publicly so that the investor can sell them).

The deal expands on Nowcom and Westlake’s existing shares in Axis. The pair first invested in the company in late 2019, providing $5 million USD through a private placement.

“This is the logical next step in our expansion into Canada,” said Anderson of the latest transaction. “Our partnership has proven to be mutually beneficial, and we are excited to grow NowLake’s ownership stake in Axis.”

In the third fiscal quarter of 2021, which ended March 31, Axis reported providing $26.6 million in loans, of which $15.8 million were owned and on its balance sheet and $10.8 million were volumes managed for Westlake Financial Services. Axis’ revenues were $9.5 million, a decrease of five percent year-over-year. Axis attributed this to lower origination volumes in the quarter due to ongoing auto dealership restrictions caused by COVID-19, most notably in Ontario and Quebec.

The NowLake investment is subject to customary regulatory and shareholder approval and is expected to close before the end of the year.