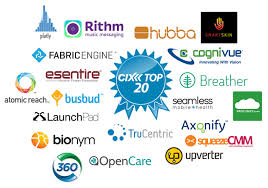 This year’s Canadian Innovation Exchange (CIX) wrapped up yesterday evening after an energetic day, involving Canada’s who’s who in technology. Startup enthusiasts, founders, coders, bloggers and venture capital firms all showed up to watch the 20 startups selected by a judging panel duke it out on centre stage, via six-minute pitches.

In between pitches, networking breaks and food and drink, several informative panels and fireside chats broke out throughout the MaRS Discovery District. The entire district seemed to be buzzing with energy Thursday: even former US Vice-President Al Gore showed up to espouse the virtues of the Ontario Liberal government’s attention to climate change and dedication to a coal-less Ontario.

The day featured 20 unique pitches from Canadian startups, some of them expert communicators, while others had only formed their businesses mere months before. In the end, Rithm, a music messaging app, won People’s Choice at CIX. This was done though an online voting page where every CIX guest received $1 million digital dollars to invest in a minimum of five companies (maximum investment was $200,000).

Rithm is a mobile music messaging platform where users can send friends songs, personalized with videos, photos and dancing emojis.

Before I detail three particular pitches that I found strong, yet unique (representing the diversity of the companies selected), I should give an honourable mention to Julien Smith’s pitch for his startup, Breather. The more I watch startups explain why people should give them money, the more I’m convinced that those who attain success do so by convincing others more so than the actual strength of their product. People will eternally argue with that statement: its talk versus work, convince or inspire versus show and explain.

In a successful startup (by revenue, valuation or social standing) there will always be a mix between the leadership’s message and the actual product, but I’m continually convinced that those who can sell are the ones who win.

Smith’s Breather is nothing spectacular, and he’ll be the first to admit it. It’s a network of on-demand, fresh, accessible, quiet spaces where people can get work done. Why settle for a crowded, loud Starbucks coffee shop when you can pay a few bucks for a breather space during that trip to New York. With the couches included, you could even catch a quick nap before the next meeting. Innovative? Hardly. But Smith was so clearly a polished speaker and convincer, that he got on stage and explained how investors could reap profits from something that will be an inevitable need in the future (with a mix of intensity and light-hearted jokes).

(At this point I should also give an honourable mention to Plot.ly cofounder Chris Parmer, who had the unfortunate position of following the pitch of a New York Times best-selling author and professional speaker in Smith. For a detailed look at what Parmer and his team at Plot.ly are doing, check out this Financial Post article on the Montreal-based startup.

A former marketer of 13 years, SqueezeCMM‘s Jen Evans got on stage and explained how her solution can solve a common plight among content marketers everywhere: how does one know how their content is performing through all the modern branches of communication, like Facebook, Twitter, LinkedIn, even billboards or magazine ads? And within Facebook, there’s individual groups or within LinkedIn, employee profiles. In all these places, potential customers “convert” as a result of content.

SqueezeCMM (“CMM” is content marketing management) wants to change marketing, so that companies and organizations deliver information of value to their customers using proper insight into how, where, when and why their content is being consumed. Evans explained that modern marketers typically turn to inferior Excel spreadsheets to collect the data. But with Squeeze, they don’t need to be coder-savvy.

Evans recounted how a two-week pilot done for Hewlett-Packard enabled the company to see what kind of content was generating the best results. Squeeze’s platform found that “twitter was performing by a lion’s share than every where else: 65 percent.” As a result, HP refocused much of their budget on the social media platform.

After his pitch, the judging panel asked Zak Homuth whether he’d ever been approached by TED talks, because the Upverter CEO had a knack for public speaking. He explained why the world should be investing more than ever in hardware design and execution, in a time when interest has never been lower.

Founded in the summer of 2010 by three University of Waterloo computer & electrical engineers, Upverter is a (ironically) software site where hardware engineers can come on and complete a project from design to manufacture, using the site’s tools.

In a passionate pitch, Homuth explained how “the biggest problems that the world is now facing- water, energy, agriculture, communication, transportation, logistics, aging populations and disease- will all be solved by hardware.”

“It’s ironic that in this moment in time when we need hardware engineers more than ever before, its also incredibly hard to do hardware,” said Homuth. “We started Upverter to make hardware easier to do, easier to turn ideas into products. Our customers are innovators, engineers, scientists and academics. There are millions of them and they work at big giant corps and little tiny hardware startups.”

And many of those engineers are responsible for the trillions of dollars of manufacturing profits every year- every electronic device, every appliance, every car we’ve ever owned, was designed by a hardware engineer.

The startup has already raised $2.5 million in venture capital, but as Homuth put it, “We’re not finished and there are still big problems to be solved.”

Bionym took the “imagine a world where…” approach, which will resonate with some or bug others who just want them to get to the point. But my guess is that all the hype that’s surrounded this innovative, Toronto-based company had the crowd’s ears perked up from the start.

Founded in 2011, Bionym is a team of thinkers and innovators aimed at shaping the world of technology through biometrics, authentication technology, and their concept of identity. They primarily do this through the Nymi wristband, which authenticates the wearer using unique topography and ECG signals. Once it does this, it can identify users securely via Bluetooth technology, to devices around the user. It has motion control so it can recognize bodily gestures, and it has been designed on the foundations of “privacy by design”, which puts users in control of their identity.

Bionym’s cofounder Foteini Agrafioti urged the audience to consider a world where where users are recognized simply by presenting themselves. “Can you imagine a world where you can walk to your car and it unlocks in your hands, but when you leave it behind, it’s always locked and secure? Your home will adjust its temperature and lighting according to your preference. Security and personalization, come together in a world where identification is redefined,” said Agrafioti.

The many cards and keys in our wallets cause unnecessary friction in our lives, she said, and Bionym developed Nymi based on the premise that everyone’s heartbeat is unique, and that security and privacy should be priority.

“The nymi is a platform that offers persistent identity,” she told the crowd. “This is not just about security: this is effortless personalization and the Nymi is right at the centre of it.”