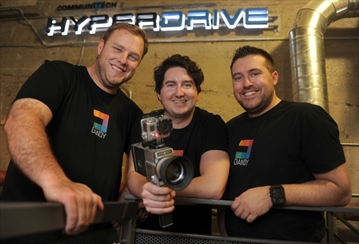 Waterloo-based startup Dandy, the group of guys that I first met at the CN Tower Elevator World Tour event last winter in Toronto, are trying to make it possible for anyone to build an app in 60 days.

The mobile app crowdsharing platform wants to give aspiring app creators everywhere the chance to have their idea developed and launched as a finished app in just 60 days, developed for BlackBerry, Android and iOS platforms. The release date is planned for January 6th, 2014, in Las Vegas.

“We want to support anyone with a good idea, anyone who says, ‘I wish there was an app for that,’ and help make it happen,” says Matt Scobel, CEO of Dandy. “With our development team, marketing capabilities, support from BlackBerry and BDC Venture Capital, we can help anyone with an app idea turn it into reality in a matter of two months.”

Dandy launched back in April, when it was then part of the HYPERDRIVE accelerator program. Then cofounders Matt Scobel, Taylor Jones and Karl Allen-Muncey created the platform with the notion that “it takes a community to raise an app”.

Now they’re going to give someone a big chance to have an app developed extremely quick.

Dandy’s 60 Day Challenge asks anyone with an app idea to submit it to be voted on by the community. No technical, design or development skills are actually needed to participate, which is quite cool. You just need a great idea.

The winner will be selected by a jury of technical, commercialization and marketing experts on November 21.

BlackBerry’s Lynda Chau said Dandy has found an “appealing way to solicit what customers can dream of in an app,” and the talent to bring that app idea to fruition. “We’re excited to work with Communitech and BDC Venture Capital to support Dandy’s 60 Day Challenge, and look forward to seeing what innovative ideas are submitted for mobile apps.”

Meanwhile, the BDC’s Michael Mahon said andy represents the “innovation potential” in the Waterloo Region, having taken a creative slant to getting people to develop apps. “Our investment in Dandy is part of our ongoing work to ensure the success of Canada’s most promising early-stage tech start-ups. We wish Matt and his team all the best with the launch of Dandy – they certainly have what it takes to succeed.”

Dandy graduated from the Communitech HYPERDRIVE incubator in April 25th, 2013, and closed a $300,000 funding round on September 27th, 2013, from BlackBerry and BDC Venture Capital.

Canadian messaging app Kik launched a Bot Shop today featuring text-command bots from a variety of partners including Funny or Die, Sephora and the…