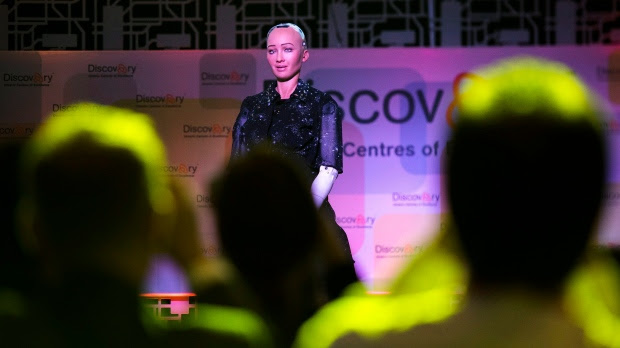 Investors in the round include Atrium Ventures, Panache Ventures, Hello Ventures, and iNovia Capital.

Sophia told the human audience that despite her ability to respond to questions, make facial expressions and express emotions, they shouldn’t be worried about her replacing them anytime soon.

Suki raises $20M to create a voice assistant for doctors

The funding was led by Venrock, with participation from First Round, Social+Capital, Nat Turner of Flatiron Health, Marc Benioff, and other individual Googlers and angels.

The round included participation from Google’s AI-focused venture fund.

AI is the new space race. Here’s what the biggest countries are doing

After years of a slow trickle, the first months of 2018 have seen an explosion of government-backed AI projects announced all over the world. Here are some of the biggest and most consequential.

“I think over the next decade, we’re going to see far more partnership, far more collaboration, and far more investment in Canada than ever before,” said Levie.

Lobe takes the concepts of machine learning, things like feature extraction and labeling, and puts them in a simple, intuitive visual interface.

To date, Mindbridge has raised $15 million in financing.

The company hopes its seasoned researchers will help recruit and train other AI experts in the two cities.

Google has created an emoji scavenger hunt that shows how the company’s machine learning tools can be used to make fun little games.

Accompany uses artificial intelligence to build databases of people and relationships at companies.