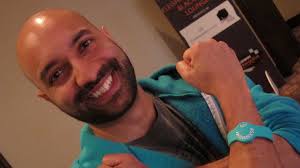 If there’s one guy who knows a thing or two about building up a startup it might be current Bionym president Andrew D’Souza. He formerly lead Top Hat, a Waterloo startup in the education technology space, from 15 to 80 employees. As COO it was his job to find the best people for the fast-growing company with big dreams, and he’s brutally honest about how he went about it.

Speaking at last week’s Series Round Venture Investment Forum in Toronto, D’Souza said companies need to be aggressive when building their dream team, and they can’t be afraid to step on some toes or make a few enemies.

D’Souza’s talk was one of the more juicy ones at the forum, and it was refreshing to hear a startup leader speak bluntly, ignoring our typically Canadian way of extreme politeness.

While growing Top Hat the team realized that it immediately needed to boost their sales team, but the problem was that there were very few high-velocity inside sales people within the edtech space. They had raised over $12 million in funding, so the resources to do so were there.

Top Hat needed people who could constantly cold-call “single-decision makers.” “We were selling professors and getting them to adopt our technology and their students were paying for it, so it was like selling textbooks,” he said.

So, they did the smartest thing they could: they targeted the daily deal sites like Groupon, who were employing tons of strong sales people. They’re hungry and they’re comfortable making tons of calls every day to a majority of people who will say “no”.

It was amusing for the Top Hat COO at the time: while Groupon’s stock was tanking, all of its best sales people were flocking to this small, Canadian education startup. “It worked out for us: not being afraid to step on some toes and being aggressive in hiring is often required.”

D’Souza told the crowd that the best people are rarely looking for a job, because they’re currently employed. It’s probably necessary to reach out to 100 people to actually close one hire. 100 people might bring a 25 to 30 percent response rate, and that usually leads to eight to 10 interviews, and one hire. “It’s a high-velocity volume game and this is why you have to have someone who is constantly focused on this. You need to be filling the pipeline,” said D’Souza.

Finally, when going after the right people, the Bionym president advised startups to make use of both direct and indirect buzz. Make sure the person you want to hire is already hearing about the company, through different ways. For Top Hat, the team made use of their investors. They knew that one high-profile name in the startup world was leaving his position and would be meeting with those same investors.

“We told the investors, ‘make sure you highlight top hat as the best place for him.’ After he had two or three conversations (that we had organized), he came to us and said ‘it seems like everyone is talking about you guys'” said D’Souza.

It’s about making sure making sure that potential candidates are hearing about the company from other sources, which they don’t feel is being engineered by you. “Whether that’s media or other respected people in the marketplace. You can almost engineer this idea that this opportunity is buzzing and it has just come on the scene.”

Alberta-based ATB Financial is hosting an open finance hackathon on February 7 and 9 at Mount Royal University in Calgary. The hackathon aims to…