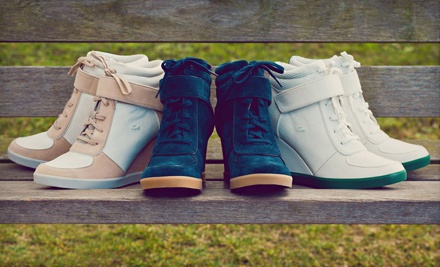 It’s stories like Vancouver’s ShoeMe.ca that get me excited about startups in Canada, and more specifically, the future of ecommerce sales north of the border.

Founded 16 months ago in the “basement suite” of his parents house, founder Sean Clark grew the ecommerce site primarily focused on women’s shoes, to 20 employees, a headquarters in Vancouver and a warehouse in Toronto. Needless to say, he’s moved on from the basement suite.

ShoeMe.ca is a Canadian online shoe retailer that also offers accessories, ranging from handbags to tights. It specializes in offering a huge selection from several well-known brands and much like Beyond The Rack, offers limited-time flash sales and end-of-line product that has been marked down.

Before starting the site, Clarke headed up the Australian operations of another Vancouver-based ecommerce play in ClearlyContacts (or Coastal as it’s known in the US) for two years. There he learned the Zappos-like model of ecommerce,  going from nothing to significant sales in a short period of time, providing speciality brand products for customers and doing it all online. Zappos is the popular Nevada-based shoe eretailer that was bought by Amazon in 2009 for $1.2 billion, pulled out of Canada in May 2011 and Clark saw an opportunity.

Actually, it probably all started because of his wife, he told BetaKit.

“At the end of the day my wife was always complaining that there’s no good Canadian websites to get fashion and shoes,” said Clark. “She’d make me go down to a P.O Box to pick up stuff she’d order from a US website and I just thought there was an opening here.”

He scrounged up start-up cash from friends and family, convinced his old boss at Clearly Contacts, Roger Hardy, to back him in the form of a small angel round, and started offering a strong value proposition to Canadians looking to buy shoes online, who didn’t want to deal with long and expensive shipping. “That in itself is a huge let down for any Canadians buying from American websites. Canadians have been underserved and they have the right to demand that they get access to quality product online,” he said.

Clark said ShoeMe is one of the few, if not the only only major online “pure play” for shoes in Canada, allowing them to offer a huge selection. There’s bigger companies selling shoes, but most of the more successful ones are traditionally brick-and-mortar companies selling much more than shoes, with a different business model (and more overhead costs). ShoeMe’s service is “all or nothing” as Clarke put it, meaning their return policy of 100 days is quite flexible, with free return shipping if a customer doesn’t like what they received.

“We want to train Canadians that they can come online and get access to brands that they know and trust,” said Clark. “We’re going to pay for the return shipping for the styles that don’t fit them or the styles that they don’t like. That’s the service that people have yet to receive in Canada that they’ve been getting in the US for about 10 years.”

The story of ShoeMe also points at Canada’s thus far unimpressive ecommerce sales figures compared to the US, the UK and even Australia. Th experts seem to enjoy calling it the “lag”.

But it is rising. Clark pointed out that by 2016, ecommerce in Canada is expected to jump to $40 billion from $16 billion in 2012. He said it’s because of companies’ like his, which are offering Canadians with “the reason to go online”.

Interestingly, 40 percent of ShoeMe’s sales are coming from rural Canadians. So not only are Canadians increasingly warming up to buying stuff online, but particularly for the shoe market, those living all over small-town Canada are playing a large part in the uptick. “Rural Canadians are starting to wake up to ecommerce in Canada, there’s no doubt about it, because otherwise they’ve been serviced very poorly and no one has invested in them,” added Clark.

As evidence, he pointed out to a dynamic map on the site that dots out the location of the last 100 orders from ShoeMe. The dots show a distribution across Canada that does point to the fact that sales aren’t just coming from Toronto, Montreal and Vancouver. In fact, one order anyone can see right now came from Baffin Island, Nunavut. The rural distribution is probably most striking in Alberta, where sales are coming from all over the province.

For this Canadian company not even two years old, the ecommerce way looks bright.

When discussing the topic of FinTech, we often hear generalized statements like “Canadian FinTech is growing” or questions like “how can the Canadian FinTech…