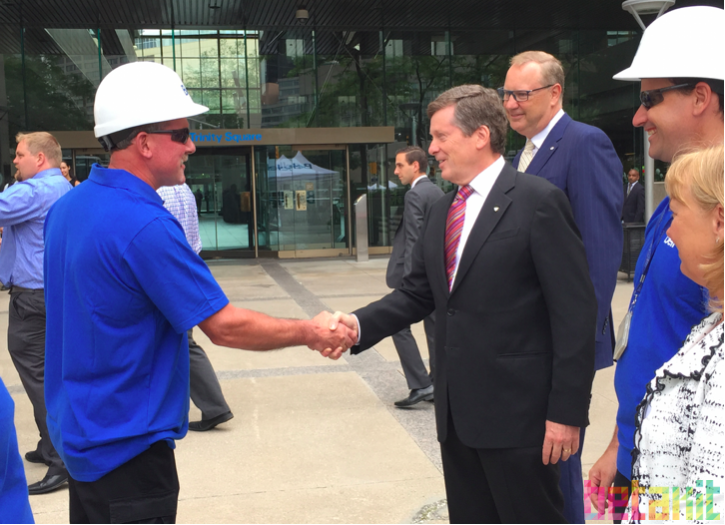 In the heart of Toronto today, Bell announced plans to invest $1.14 billion and rollout Gigabit Fibe this summer across the city, followed by several other locations across Canada. The investment will bring with it gigabit-per-second Internet speeds, giving Bell customers the ability to download 100 photos or songs in 3 seconds, or an entire HD movie in 7 seconds.

Toronto Mayor John Tory was on hand for the event, calling it “a huge announcement for the city.” BetaKit was able to catch up with Mayor Tory to learn more about his views on the current startup climate in Toronto.

How do you view Toronto as a startup community compared to other Canadian cities?

We are the innovation centre of the country, and the difference between Toronto and other cities is that we have both financial and innovation capitals here. Whereas in the United States, for example, new York is the financial capital and the innovation capital is on the west coast. We have them both in one place. On top of that, which I think is the single biggest advantage is that we have this huge pool of talent that goes all the way out to Waterloo.

How will the City of Toronto help empower startups to create new ideas and build innovative solutions and services?

I think what’s happened is that we’ve had some advantage from all of that, but it’s happened more by happenstance than by the city, government, and other governments working with industry to make it happen. I am really gratified by the fact that the last number of years you’ve had Incubes, OneEleven, DMZ, and UoT. They were telling me, for example, that UoT itself has 79 startups as part of their environment.

“What we haven’t had is a conscious strategy. If you have a city that looks like it’s in the 1960’s you won’t attract anything new.”

What we haven’t had is a conscious strategy. You have to say to people, if you are going to be here, and you’re going to be developing and growing here, you will have access to the very best telecom and broadband infrastructure in the world. You have to say it… It’s one of the reasons I am pushing the city to be smarter because if you have a city that looks like it’s in the 1960’s you won’t attract anything new… I want this place to be the most friendly place in North America for startups and I think it can be.

One of the issues for Canadian startups is finding ways to secure funding. What about investment?

It’s coming. We’ve had, as you know, in this country a huge problem to access to capital. There has always been investment available to startups but as they grow into the next stage, people are forced to sell. Simply because there isn’t the capital here. It’s coming. If you look at some of the work of people like John Ruffolo and even some of the pension funds that have been set up, it’s coming.

Part of my job is to try and push the financial institutions to make investments and they are moving on their own, but I want to push them to try and do more to make sure, say these 79 startups at UoT will still be in existence and still here 10 years from today and have grown. As opposed to, what might happen is that they don’t succeed or others will move away or be sold. I think that is a huge challenge in front of us. I think it is coming. It’s better.